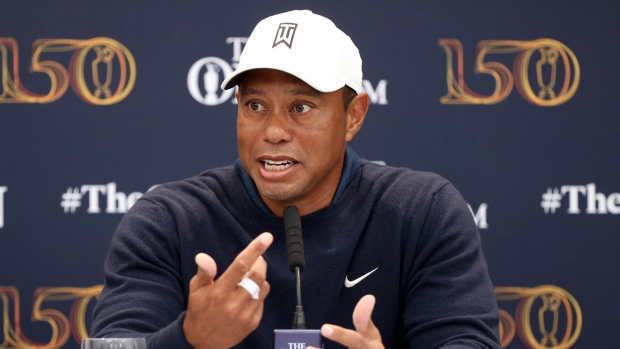 Tiger Woods won’t be hitting any shots at this week’s Hero World Challenge, but that didn’t stop him from taking verbal shots at a number of golf’s current hot-button issues.

Woods, who withdrew from the tournament that he hosts on Tuesday due to a foot ailment, tamped down expectations of his future play, called for an overhaul of the Official World Golf Ranking system and suggested that Greg Norman step down as head of LIV Golf in a wide-ranging press conference.

“It was a tough decision just because I want to play,” said Woods of sitting out this week. “I like playing. I like competing. But unfortunately, I can hit the golf ball and hit whatever shot you want, I just can't walk.”

Woods said that in preparing for this week’s tournament, he began to walk more and more, which led to a bout of plantar fasciitis, a painful ailment felt mostly in the heel.

He added that doctors have told him that the ailment is related to the severe leg injury he suffered in a car crash in February 2021.

The withdrawal once again reaffirmed that Woods will only be able to play a limited number of tournaments for the remainder of his career. He hasn’t played a competitive event since the Open Championship last July.

“The goal is to play just the major championships and maybe one or two more,” said Woods. “That's it. I mean, that's – physically that's all I can do.”

Woods revealed that he has undergone two surgeries in the past year but wouldn’t go into any detail.

While the 15-time major champion won’t be playing as much, he is still certainly invested in the PGA Tour. He made that clear in his strong comments on the rival LIV Golf league, saying that it was possible for to meet and discuss the future, but not with Norman still at the helm.

“Not right now, not with their leadership. Not with Greg there and his animosity towards the tour itself,” Woods stated. “I don't see that happening. As Rory [Mcllroy] said and I said it as well, I think Greg's got to leave and then we can eventually, hopefully, have a stay between the two lawsuits and figure something out.”

LIV Golf has sued the PGA Tour, claiming a restraint of trade among other things. That led to a countersuit from the PGA Tour. Both legal matters are currently tied up in court and won’t be heard for some time.

“I just think that there's a window of opportunity for us from both tours to figure this out shortly,” Woods stated, “but I think that window's closing just because the majors are coming up now and they're going to have their own criteria for the majors.”

Woods was also blunt in his assessment of the Official World Golf Ranking.

“It’s a flawed system,” he stated. “That's something we all here recognize. The field at Dubai got less points than Sea Island and more of the top players were there in Dubai, so obviously there's a flawed system.”

Woods pointed out that the system has been altered many times in the past, saying that one season he’d amassed so many points, he could have taken the next season off and still remained as No. 1 in the world. That led to an alteration.

“Somehow [we have to] come up with a better system than is in place now,” he said.

In spite of the latest injury, Woods is still set to play on Dec. 10 in the a made-for-TV tournament where he and McIlroy will take on Jordan Spieth and Justin Thomas. On Dec. 15, he and his son Charlie will play in the PNC parent-child championship. In both events, he is permitted to take a cart.