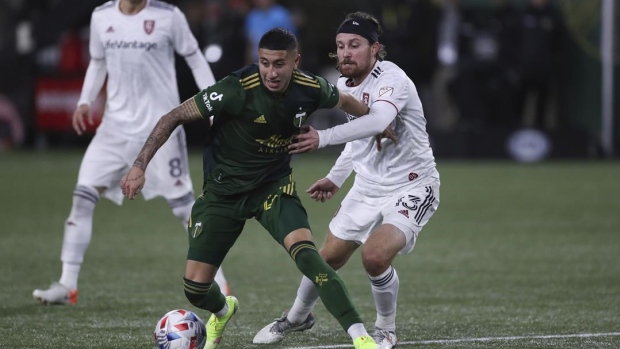 PORTLAND, Ore. (AP) — Marvin Loria scored on the rebound of his penalty kick in stoppage time for the Timbers, but an own goal moments later pulled Dallas into a 1-1 draw with Portland on Saturday night.

The tie extended Portland's undefeated streak to 10 games, the longest in Major League Soccer, with four wins and six draws.

The Timbers (7-6-12) moved into seventh in the Western Conference, just above the line for a playoff berth with nine games remaining.

Midfielder Sebastian Lletget started for Dallas after practicing twice with his new team. He was acquired this week from the New England Revolution for $600,000 in general allocation money split between this season and next. He scored three goals in 22 games across all competitions for the Revs this season.

Lletget has eight goals in 33 games with the U.S. national team. He played in four World Cup qualifiers last September and October, scoring in the 4-1 win at Honduras.

Paul Arriola nearly scored for Dallas on a breakaway in the 28th minute but his shot that flew past Portland goalkeeper Aljaz Ivacic hit the far post.

Arriola had another chance in the 59th minute. Challenged by Ivacic, his shot went into the side netting.

Loria's penalty attempt was stopped by Dallas goalkeeper Maarten Paes, but Loria buried the rebound. Dallas' goal came off a corner kick that deflected off of Timbers midfielder Diego Chara.

The Timbers started Chara and Dairon Asprilla, who missed Wednesday night's 1-1 draw with Nashville because of yellow card accumulation.

Paxton Pomykal was out for Dallas with a minor thigh injury.

Late in the game, the Timbers Army fan group waved sunflowers to honor the late daughter of original team mascot Timber Jim. Jim Serrill's daughter Hannah was killed in an automobile crash on Aug. 5, 2004. The supporters sing “You Are My Sunshine” every game in the 80th minute in Hannah's memory.