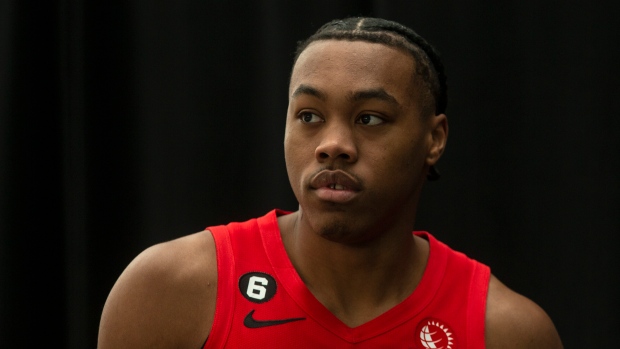 VICTORIA — Nick Nurse's challenge to Scottie Barnes heading into this past off-season was to keep improving his game. Pretty straightforward, but not necessarily so easy coming off an outstanding rookie season.

"But I think that's a challenge, right?" he added. "Kid played hard last year and the kid competed last year, and can you continue to do that each time the ball goes up?"

Four days into training camp at the University of Victoria, Nurse has seen an improvement in Barnes' shooting.

"It feels like it's better and he's making more in the rhythm of what we're doing," Nurse said after Friday's practice. "He's not hesitating to take them at all, the threes. He's still doing the rest of the stuff. He's got that long, slow, strong drive where he puts it in the basket.

"He's got that pull-up thing when he has a size advantage. But the frequency with which he's letting them go is certainly on the rise."

Nurse said Barnes has made improvements to his six-foot-nine 227-pound body as well.

"Every time I saw him in the summer I would go 'Wow!' … He's in great shape. He looks strong and I think the good thing is he feels it as well, and he's using it right? He's a physical player, man, which is good."

Nick Nurse got a better look at this year's team in an open scrimmage on Friday night.

O.G. Anunoby threw down an array of dunks and scored 16 points, while Pascal Siakam had 12 in front of a sellout crowd of about 7,000 fans at Save-On-Foods Memorial Centre to cap training camp in Victoria.

Nurse was impressed with his starters — but not much else.

"(The starters) weren't scoring very well or making many shots all week, and of course they come out tonight and made all of 'em. That stood out for me because they were creating pretty good shots for each other, making extra passes, moving the ball, I thought that was pretty good," Nurse said.

"Each and every one of the starters did some things that showed really well. And after that? I'm not sure, to be honest with you, that anybody else did a whole lot to wow any of us."

Barnes ran onto the floor during introductions like he was about to climb into a WWE ring, and then did a lap around the arena at the end, high-fiving all the fans in the first row.

Otto Porter Jr. (hamstring) and Thaddeus Young (knee) sat out Friday night's practice with injuries. Nurse said Porter could be out "a little while."

The Raptors fly to Edmonton on Saturday to open the pre-season against Utah on Sunday.

The fight for final roster spots between Toronto native Dalano Banton, Justin Champagnie, D.J. Wilson and Josh Jackson has been fierce so far in camp.

The Raptors have 20 players in camp, and must whittle that down to a roster of 15, plus two players on two-way deals between the NBA team and Raptors 905, the club's G League affiliate.

"It'll be interesting," Nurse said. "You can make a case for just about everybody. We'll start dialing it in right now."

The evaluation of bubble players will continue in Sunday's pre-season opener in Edmonton.

Note: The Raptors practised in orange T-shirts Friday to commemorate the National Day for Truth and Reconciliation.