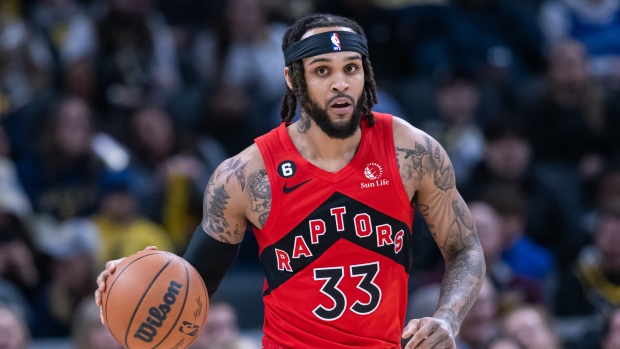 TORONTO – Clearly, Gary Trent Jr. knows he’s got some catching up to do.

After missing three games, first with a hip injury and then with an illness that’s been spreading through the organization, the Raptors’ guard returned to practice on Monday and was among the last players in the gym following Tuesday’s session.

He’ll be back in the lineup when Toronto hosts the league’s most controversial club, the Brooklyn Nets, and its most polarizing player, Kyrie Irving, on Wednesday night. His timing couldn’t be better.

Pascal Siakam is set to miss his ninth straight contest with an adductor strain. They’re hoping to get him back sometime next week, but the team will have to manage without its leading scorer and top playmaker for at least a couple more games.

However, good news comes at a cost these days, it seems. Although Siakam is finally nearing his return, and Trent, Chris Boucher and Fred VanVleet have all recovered from bouts of the flu, the Raptors added another prominent player to their growing injury report.

Scottie Barnes has been absent from practice this week, not because of his lingering ankle ailments, but with a sprained left knee. It’s not clear when he initially sustained the injury, but while head coach Nick Nurse doesn’t think it’s “terribly bad” and the team is listing him as questionable for the Nets game, it sounds like they’re preparing for the talented sophomore to miss some time.

Down two of their primary creators – in addition to key reserves Precious Achiuwa and Otto Porter Jr., who remain sidelined with ankle and foot issues – the Raptors will lean on Trent to buoy a struggling offence.

He can’t create scoring opportunities for others in the same way that Siakam or Barnes can, but he does have the ability to hunt his own shot and, when he’s at his best, knock it down at a high rate. It’s something they could use considering they’ve hit just 28 per cent of their three-point attempts since Siakam slipped on a wet spot in Dallas earlier this month. The problem is that it’s been a while since he’s played at or anywhere close to his best.

Over Siakam’s absence, Trent is shooting 35 per cent from the field and an abysmal 19 per cent from long distance. He missed his last nine threes before succumbing to the injury – and, eventually, illness – bug himself.

While shooting and scoring are such big parts of Trent’s game, his offence is the least of Nurse’s worries. Acknowledging that the hip soreness and a series of other ailments he’s been playing through could be at least partially responsible for Trent’s recent slump, Nurse believes it’s only a matter of time before those jumpers start to fall.

“We know he’s a good shooter and we know he can score,” Nurse said. “Just got to get him feeling good physically out there. I think he’s always got the confidence to make shots.”

For Toronto’s defensive-minded head coach, the bigger concern is on the other side of the floor. After Trent signed a new three-year, $54 million deal with the Raptors in the summer of 2021, Nurse challenged the young guard to take all the energy and focus that he normally expends on offence and match it on the defensive end. He responded last season, making notable strides as a defender.

Given the team’s roster construction, primarily consisting of long and rangy forwards, their smaller guards stand out. But VanVleet more than makes up for it with his intellect and by playing bigger than his height, generously listed at 6-foot-1. He’s a tough defender who knows where to be and when. He’s always playing the angles and has some of the quickest hands in the league.

Trent is nowhere near that calibre of defender. Even throughout last year’s breakout, his effort level and attention to detail would occasionally wane and he was still prone to defensive lapses, especially away from the ball. That said, when engaged, he was as good as anybody at locking down opposing guards on the perimeter and disrupting passing lanes. He made up for his lack of, well, being 6-foot-9 or having a 7-foot wingspan with his activity and aggressive play on defence.

Trent finished the season tied for fifth in steals with 1.7 per game and averaged an impressive 3.4 deflections, which ranked second on the team – just below VanVleet – and fourth in the NBA.

This year, his deflections are down to 2.4 per contest, but mostly, he hasn’t looked as engaged or been as active. Again, Nurse made sure to note that injuries might be a factor. Even still, he had strong words regarding the 23-year-old’s defensive slippage on Tuesday.

“It’s disappointing,” said Nurse. “We’d like to get him a lot more aggressive on defence this year. I would say that’s been a, well, I don’t know what the word is – it’s been a little bit of a negative. He’s capable of really getting after the ball and getting his hands on the ball a lot, and that’s what we want him to do.

The timing of this challenge from Nurse is interesting and probably not coincidental. Trent can opt out of his contract and become an unrestricted free agent this coming summer, and the expectation is that he will do just that.

Trent only turns 24 in January and has shot the three-ball at an excellent 38 per cent clip over his five-year career. At worst, he can be a very good volume scorer coming off somebody’s bench, but he’s also flashed the ability to become more than that. With the salary cap continuing to rise, that profile should be enough to earn a raise on the $18.8 million he would be opting out of for next season.

How much could he fetch on the open market? At 23 and coming off a breakout season in which he put up similar numbers, Trail Blazers guard Anfernee Simons is a good comparable. Simons signed a four-year, $100 million extension with Portland, Trent’s former team, last summer. Even if his season continues on its current path, that could be a fair estimate for Trent. If he gets healthy, bounces back from this mini slump and takes another step forward, that might only be his baseline.

The question is whether the Raptors are willing to pay up, or – with VanVleet, Achiuwa, Siakam, O.G. Anunoby and eventually Barnes due for expensive new deals in the coming years – decide he’s not a long-term fit at that cost. And, if that were the conclusion that Nurse, team president Masai Ujiri and general manager Bobby Webster ultimately come to, it would make sense to try and get an asset or two for Trent ahead of the February 9th trade deadline rather than losing him for nothing in July.

They’re not there yet, for what it’s worth. As recently as this past summer, the Raptors were telling inquiring teams that they saw Trent as a valuable part of their young core. It’s hard to imagine that’s changed a month or so into the campaign.

Still, these next few weeks will be an important evaluation period for both player and team to determine whether they have a future together beyond this season.