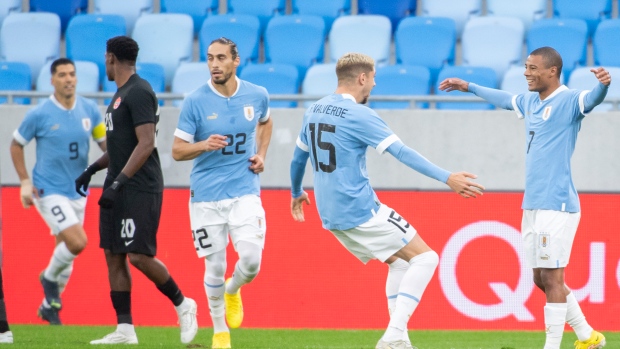 BRATISLAVA, Slovakia — Nicolas De La Cruz and Darwin Nunez set the tone in the first half with a goal apiece as 13th-ranked Uruguay topped Canada 2-0 in a men's soccer friendly on Tuesday.

De La Cruz scored on a free kick from the left side just outside of the box in the sixth minute, and scored by the near-side post as goalkeeper Milan Borjan could not get enough on the ball to stop it.

Following a close miss on a volley shot from a Luis Suarez cross five minutes earlier, Nunez made up for it with a header goal in the 33rd minute off a cross from Suarez to put his side up 2-0.

It's one of the last World Cup tune-up matches for the 43rd-ranked Canadians before they take the field in Qatar in November. The national team takes on No. 24 Japan on Nov. 17 before taking the pitch Nov. 23 against Belgium in World Cup action.

Canada was coming off a 2-0 win over Qatar last week.

Despite conceding the two goals, Canada dominated possession in the first half (59 per cent to 41 for Uruguay) and was not short on scoring opportunities.

Alistair Johnston was just off on a header from a cross sent by Alphonso Davies in the 12th minute. A dozen minutes later, Cyle Larin found an opening, taking a pass from Davies, but his left-footed shot was saved.

In the 39th minute, Davies drew the attention of multiple defenders outside of the box before sliding a pass to an open Larin inside the box. With the ball bouncing in front of the Brampton, Ont., native, he had his shot blocked after attempting to get it set properly.

Larin missed again one minute later on a header following a cross from Samuel Adekugbe. In the 41st minute, Davies once again pulled the eyes of multiple Uruguay defenders and sliced a through ball to send a streaking Jonathan David into the box but his shot was stopped.

After a quiet start to the second half for both sides, Canada pressed again with eyes on closing the gap.

In the 63rd minute, Davies corralled the ball after a Canada cross was knocked away and found David driving towards the box. David turned around and shot from just inside the box but Sergio Rochet saved it leading to a corner.

After Davies' corner was cleared out of bounds, Uruguay handed the Canadians a free kick with a foul in the 64th. Stephen Eustaquio sent a pretty cross into the box, but Kamal Miller headed the ball just over the net.

Despite consistently being in Uruguay's end for much of the second half, Canada did not come any closer to putting the ball in the back of the net.

Canada finished the match having outshot Uruguay 11-6 (3-2 on target), controlling 56 per cent possession for the match and taking seven corner kicks.