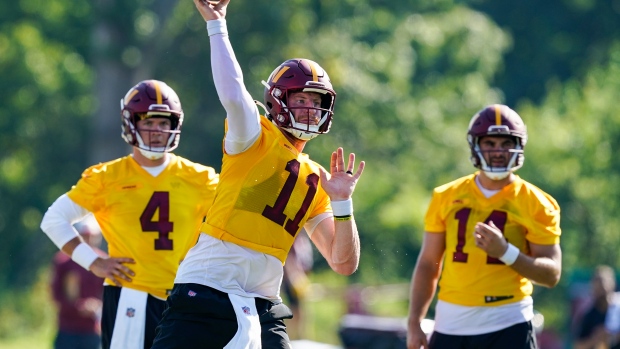 "He's here because we want him here"

Ron Rivera on Carson Wentz and the opportunity he has with the @Commanders #HTTC I #NFLTrainingCamp pic.twitter.com/i3PM6iW47W

Rivera, heading into his third season with Washington, says that Wentz, now playing for his third team in three seasons, is with the Commanders because he's wanted there.

The second overall pick of the 2016 NFL Draft out of North Dakota State, Wentz was acquired by the Commanders from the Indianapolis Colts in exchange for a second-round pick and a pair of third-round selections. Rivera says that his new teammates have already rallied around Wentz.

“We have a lot of confidence in what we’ve seen so far," Rivera said. "The guys have all assimilated to him. They’ve rallied around him. And that’s a huge plus because, again, based on what we went through for the last couple of years — and probably before I got here — trying to find the quarterback.”

Last year's starting QB, Ryan Fitzpatrick, incurred a season-ending injury during Week 1, leading to Taylor Heinecke taking over as the starter for the remainder of the season.

The Commanders have missed the playoffs in five of the past six seasons.