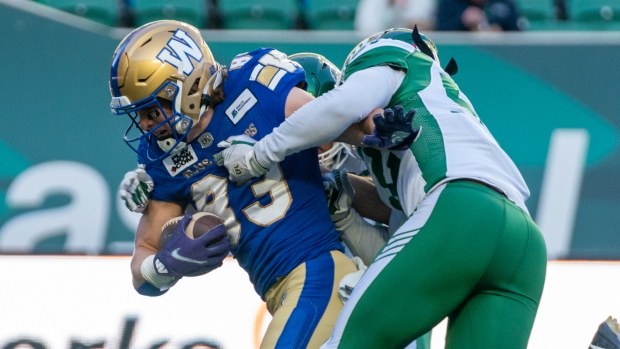 WINNIPEG — The Blue Bombers are coming off their worst performance of the season.

The reigning Grey Cup champions were overwhelmed 48-31 by a desperate Hamilton Tiger-Cats team with one of the worst records in the CFL two weeks ago.

After a bye week to try to determine what went so wrong, the Bombers will host the Saskatchewan Roughriders on Friday, another team that desperately needs wins to make it to the Grey Cup Game, which will be played in its own backyard.

“The last game was a loss, then we had the bye week, so we had a bad taste in our mouth,” Bombers defensive end Willie Jefferson said Thursday. “So, we’re ready to go out there and play some football and get a W.”

But, are they concerned that Hamilton showed other CFL teams how to beat them?

“Not at all,” Jefferson said. “It was just a good game from Hamilton. We had some mishaps on the offensive side of the ball to give Hamilton a good opportunity to win that game. They had a good atmosphere and a good energy about themselves. They just came out and played a better game than us.”

Winnipeg quarterback Zach Collaros chalked it up to making too many mistakes, including his own three critical turnovers (two interceptions and a fumble). But he was not worried that the Tiger-Cats drew up the blueprint for beating Winnipeg.

“I guess that would be an answer for opposing teams,” he said. “Usually, losses or wins come down to making five or six plays. In that game, obviously turnovers put ourselves into bad situations.

“But, we’re gonna stay consistent with the way we prepare and the way we go about things. If anything, what we should do every week is add to the sense of urgency, and I think we did.”

“In pro football, there’s such a small difference between winning and losing that I think it’s just a good reminder that any given week, anybody can win and if you’re the best team in the league with the best record, there’s a chance you can get beat,” he said. “So, I think you’ve got to give credit to Hamilton. (Quarterback) Dane Evans had an outstanding game and they just did a great job. It was in their barn and they’ve got a lot of pride and I think they probably felt they owed them one.

“The reality is, Winnipeg is still the class of the league. They’re 12-2 for a reason and they’re going to be a tough out going forward.”

Dickenson predicted that the Bombers will regroup earlier this week.

“That was probably their worst game of the year,” he said. “But they’re such a strong, veteran-led team that I don’t think you’ll see that from them again. They’re well-coached, they’re disciplined. They’ve got a lot of pride and I think we’ll see their best on Friday, and we hope so. We want to see where we’re at.”

“Hamilton was playing at home and had a lot to play for — a lot like us,” he said. “They went out there and executed their game plan and that’s the beauty of football. Whatever team shows up that day is gonna win. There’s not really a blueprint for beating a team or not beating a team.

“We’re a team that has their back up against the wall and we’ve got to find any way we can to win a football game and hopefully, it starts Friday night.”

Dickenson, by the way, apologized to his team when it returned from its bye week.

The Bombers can clinch a home playoff game with a victory over Saskatchewan … Bombers WR Dalton Schoen needs 12 yards to become the seventh rookie Bomber to reach 1,000 yards receiving …. Kienan LaFrance will start at tailback for the Riders.

The Bombers, Roughriders and the Exchange Income Corporation have partnered to honour Canada’s National Day for Truth and Reconciliation at Friday’s game where 1,000 members of the Indigenous community will be flown in and hosted. The Bombers and Riders will wear special orange New Era jerseys for pre-game warm-up to recognize Orange Shirt Day. The Bombers jerseys will be available for an online auction after the game with the funds raised donated to the Winnipeg Aboriginal Sports Achievement Centre (WASAC). The Riders foundation will raffle off their orange jerseys.

This report by The Canadian Press was first published on Sept. 28, 2022