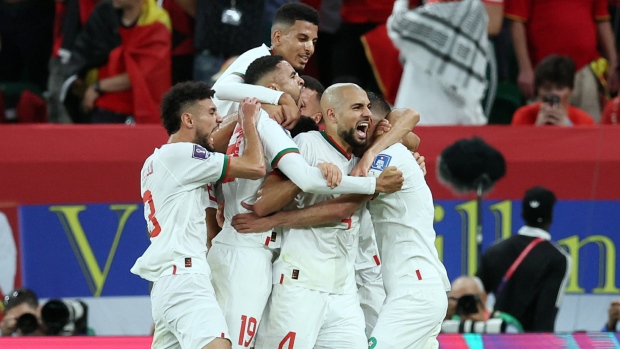 DOHA, Qatar — A look at Morocco, Canada's opponent Thursday in its Group F finale at the World Cup:

This marks the sixth appearance at the World Cup for the Atlas Lions. They have got out of the group stage just once before, in 1986 when they became the first African side to reach the knockout round — losing 1-0 to eventual runner-up West Germany on an 88th-minute goal by Lothar Matthaus after topping a group that included England, Poland and Portugal.

The Atlas Lions went unbeaten in qualifying (7-0-1), outscoring the opposition 25-3.

Their roster features players with clubs in Belgium, England, France, Germany, Italy, Qatar, Saudi Arabia, Spain and Turkey in addition to three from Morocco, all from reigning champion Wydad AC.

Notable players include Paris Saint-Germain fullback Achraf Hakimi and Chelsea winger Hakim Ziyech. The 23-year-old Hakimi, a product of the Real Madrid academy, has 10.9 million followers on Instagram while Ziyech has 6.7 million.

Goalkeeper Yassine Bounou, who was born in Montreal and raised in Morocco, turned down an offer to wear Canadian colours from former Canada coach Benito Floro prior to playing for Morocco. The 31-year-old Sevilla 'keeper won the Zamora Trophy last season for the lowest goals-against average in Spain's La Liga.

Bounou started Morocco's opener and was set to start against Belgium. But after lining up with the other starters for the national anthem, he did not take the field. Munir El Kajoui (Al Wehda FC, Saudi Arabia) started in his place with Bounou reportedly withdrawing after telling his coach he felt dizzy due to an eye problem.

Former Moroccan international Walid Regragui took over the national team in late August after Vahid Halilhodzic was fired. The 47-year-old Regragui was coming off a championship season with Wydad winning the Moroccan league and African Champions League title.

His hiring paved the way for the return of Ziyech and Bayern Munich defender Noussair Mazraoui, who had fallen out with the previous coach.

Regragui is no stranger to Qatar having coached Al-Duhail for a year.

Canada has not beaten Morocco in three meetings (0-2-1), losing 4-0 the last time they met — in 2016 in Marrakech. The only Canadian starters that day who are on the World Cup roster are goalkeeper Milan Borjan and midfielders Jonathan Osorio and Samuel Piette

Morocco has not conceded a goal in its last six international matches. And it has won 11 of its previous 13 meetings against CONCACAF teams.

This report by The Canadian Press was first published Nov. 20, 2022