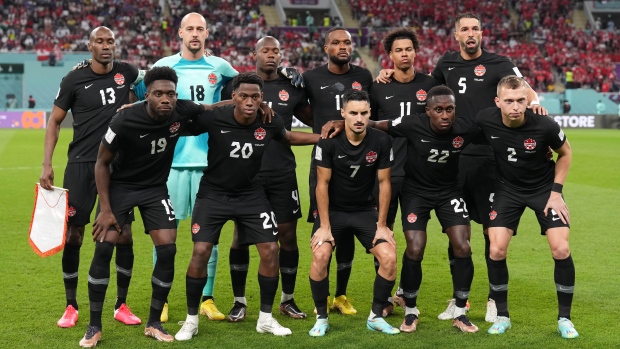 DOHA, Qatar — With one game remaining, Canada is still chasing history at the World Cup. But a motivated Morocco stands in its way of a first-ever positive result at the men's soccer showcase Thursday.

For coach John Herdman, the 41st-ranked Canadians ticked off one box in a "fearless" performance in their tournament opener, pushing No. 2 Belgium to the limit in a 1-0 loss. And Alphonso Davies' goal 68 seconds into the match against No. 12 Croatia ended Canada's scoring drought at the tournament, albeit in what turned out to be a 4-1 defeat.

Plenty of other targets remain in what will be the Canadians' last World Cup outing until 2026, when Canada co-hosts an expanded 48-team tournament.

"We've missed out on the first team to advance from a World Cup group stage but we haven't been here for 36 years," Herdman told the pre-match news conference. "You play Belgium, Croatia. The first time you've played top, top teams in over a decade and it's on the world stage to get out of a group stage.

"We believe those goals are still achievable," he added.

On Tuesday, Herdman showed players and staff video of fans back home celebrating Davies' historic goal Sunday as the 22-year-old from Edmonton joined Helen Stoumbos in the Canada Soccer record book. Stoumbos scored Canada's first goal at the Women's World Cup, in the 87th minute of a 3-2 loss to England in June 1995.

For the Canada coach, the Davies goal is a moment to remember — and inspire.

"They got to see what we really came here for, which was to give Canada that moment," Herdman, referencing the celebrations back home, said of his players. "And to be proud, to be proud of moments like that. Because there's more to come."

Canada lost three straight and went home in its only other trip to the tournament, in Mexico in 1986.

"We made a big step here," said Herdman citing praise from Belgian assistant coach Thierry Henry after the opening match.

Herdman said Henry, a former star forward who went on to coach Montreal's MLS team, said the Belgians should have lost the match. The Canada coach also noted the sight of the Croatia players celebrating having beaten Canada.

"These are what we came (here) to do … to try and compete against the best in the world. And I think we put our best foot forward to compete," he said.

"We had great moments against Belgium and Croatia … football moments that our country can be proud of," he added.

Morocco, ranked 22nd in the world, can still extend its World Cup moment.

"Our players want to make history and they're going to give 110 per cent to ensure the Moroccan population is happy," Morocco coach Walid Regragui said through an interpreter.

He knows a draw at the 44,400-capacity Al Thumama Stadium will be enough to see Morocco finish runner-up in Group F, as will a Belgium loss to Croatia in the group’s other final fixture, while a win could see it finish atop the pool.

"What we want is to actually be masters of our destiny without having to calculate, to rely on other squads' results," Regragui said.

The Moroccans currently sit second in the group, behind Croatia on goal difference with both teams at 1-0-1. Belgium is third on three points at 1-1-0 with Canada yet to register a point at 0-2-0.

After starting the tournament on a high, albeit in defeat, the Canadians look Thursday to reinforce the message that they belong on the world stage.

"Everybody wants to make history this last game," said Canadian midfielder Jonathan Osorio. "That's what we're focused on. We've had a good showing in the first two games. But I think in football people always remember the last game that you played the most and so we're looking forward to ending this tournament on a high."

Regragui called it a very difficult match against "a team with nothing to lose."

Regragui, who answered questions in French, Arabic and English, was treated like a rock star at the earlier Morocco news conference, signing T-shirts and posing for selfies.

But his feet clearly remain on the ground

The Atlas Lions look to repeat their success of 1986 when they became the first African side to reach the knockout round — losing 1-0 to eventual runner-up West Germany after topping a group that included England, Poland and Portugal.

Morocco failed to advance four years ago in Russia, losing to Iran and Portugal and tying Spain.

Morocco opened its campaign here by drawing Croatia 0-0 before upsetting Belgium 2-0 for just its third win in 18 career games (3-9-6) at the World Cup.

Herdman said he had one injury concern in the midfield, without identifying the player. Stephen Eustaquio had to leave the Croatia game at halftime due to a hamstring injury he has been carrying.

This report by The Canadian Press was first published Nov. 30, 2022