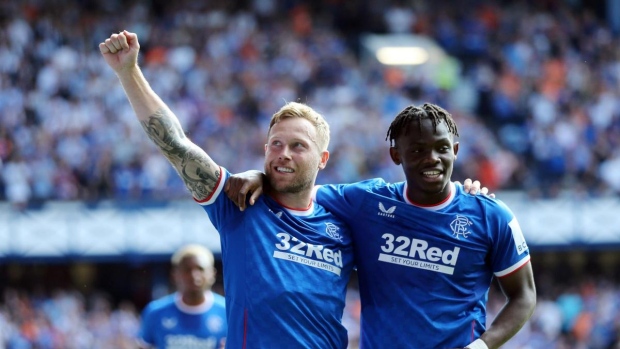 Scott Arfield, Rangers - It's been a good week for Rangers. Their Champions League hopes, seemingly hanging by a thread after a 2-0 loss in the first leg of their third-round qualifying tie against Union SG, sprang back to life after a 3-0 win at Ibrox in the second leg to advance to the fourth round. A win against PSV Eindhoven in a two-legged tie this week will put Gio van Bronckhorst's team into the group stage proper for the first time since 2010. Domestically, Rangers made it three wins out of three matches with an emphatic victory over St. Johnstone on Saturday at Ibrox. Goals from Mark Tillman (32nd) and Antonio Colak (62nd) already put Rangers on course for victory, but Scott Arfield would get into the act in the 80th. Ryan Jack cut sliced through the St. Johnstone defence with a beautifully placed through ball for Rabbi Matondo. In alone, the Wales forward dinked around goalkeeper Remi Matthews, but found himself at the touchline with no avenue for a shot. Spotting the oncoming Arfield, Matondo squared a pass for the former Canada midfielder to tuck home with his right foot into an empty net. Tom Lawrence finished the rout with another in the 83rd to make it a 4-0 win. Through three matches, Rangers sit on nine points, level with leaders Celtic. The first leg in their tie with PSV is set for Tuesday in the Netherlands.

Milan Borjan, Red Star Belgrade - Last season, Red Star Belgrade pipped Partizan to the Serbian SuperLiga title by two points. This season, the champions, led by captain Milan Borjan, are hoping things won't be that close. Through five matches (the league got started well ahead of most other European leagues in early July), Borjan has conceded a single goal as Red Star has won all five of its league matches and scored 21 goals doing it. Borjan put his league-leading fourth clean sheet on Saturday in a 4-0 thrashing of Vozdovac. Red Star got goals from Aleksandar Pesic, Osman Bukari, Ben Nabouhane and Mirko Ivanic. Next on the docket for Borjan and Red Star will be booking a place in the Champions League group stage. After dispatching Armenian side Pyunik 7-0 on aggregate in the third round of qualifying, Red Star meets Israel's Maccabi Haifa in a two-legged tie for passage into the group stage. Red Star is looking to reach the Champions League group stage for the first time in three seasons.

Jonathan David, Lille - After an opening match rout of Auxerre, the goals just weren't coming for Lille on Matchday 2 against Nantes, but Jonathan David and company found a way to secure a point. Nantes took the lead in the 28th when Lille fell asleep at the wheel on a set piece. Off of a corner, Andrei Girotto's little flick towards the far post was poked home by Moses Simon, who was faster to it than any of the Lille backline. It was the first time in the early season that LOSC had trailed at any point. The frustrations continued for Lille into the second half as possession was squandered and promising-look attacks were snuffed out. Lille would finish the match with 17 shots, seven more than their hosts. Lille did manage to earn a draw, though, thanks to new signing Ismaily with David playing a role in the goal. Running down the left side, Ismaily engaged in a quick give-and-go with Angel Gomes. Getting the ball back, Ismaily darted into the area and dropped off for David, who immediately fed the ball back to the Brazilian whose low shot beat goalkeeper Alban Lafont in the 76th. It was the second assist in two matches for Ottawa's David, who also scored a brace in the opening match. Next up for Lille is a big one, a home date on Sunday against Kylian Mbappe, Lionel Messi and the rest of Paris Saint-Germain