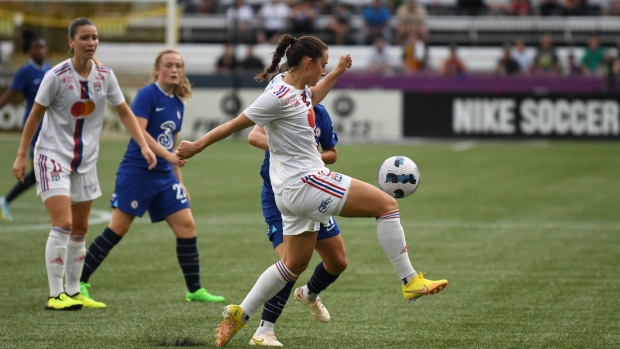 PORTLAND, Ore. (AP) — Ines Benyahia converted the deciding penalty kick and Lyon advanced 4-3 on penalties after a 2-2 draw with Chelsea on Wednesday night in the opening match of the Women's International Champions Cup.

Lyon will play the winner of the late match between the Portland Thorns and Monterrey in the championship Saturday.

Sam Kerr scored on a chip over the head of goalkeeper Christiane Endler in the eighth minute to give Chelsea the lead. Lauren James added a goal in the 50th.

Lyon scored two late goals to draw even. Former Thorns midfielder Linsey Horan scored in the 76th on a free kick and Signe Bruun added the equalizer in the 88th. After regulation, the match went straight to penalties.

All four teams in the tournament earned a spot in the field because of championships in their respective leagues. Lyon won the Champions League and the French championship while Chelsea is the Women’s Super League champion.

Monterrey was the 2021 Apertura winner in Liga MX, and the National Women’s Soccer League’s Thorns were the Supporters Shield and Challenge Cup winners last year.