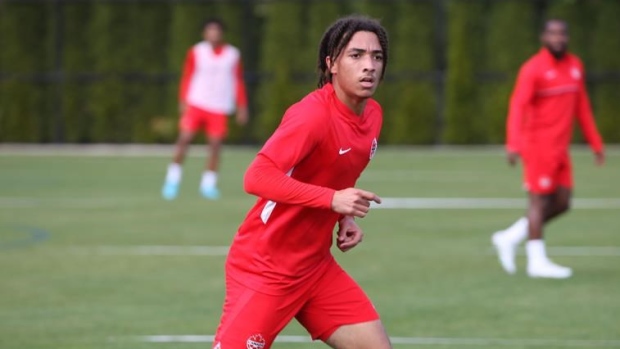 Having left home at 11 to pursue his soccer dream in Spain, Luca Koleosho has worked hard to get where he is today.

Now 18, the RCD Espanyol winger is in camp with Canada but has plenty of international options having been born in the U.S. to a Nigerian father and Italian-Canadian mother, who was born in Montreal.

Koleosho owns four passports. While he has yet to choose his international path, he says he's enjoying his time with Canada.

His first taste of the Canadian team was somewhat chaotic. He was part of the ill-fated camp in Vancouver in June when the players boycotted a planned friendly with Panama due to a contract dispute.

Koleosho left the camp early and was not involved in subsequent CONCACAF Nations League games against Curacao and Honduras.

"After all the turmoil off the field, you were wondering whether he was going to come back," coach John Herdman said when his roster for September friendlies was announced.

"Literally the kid came in and he was only scheduled for an experience for that Curacao (game) period. We weren't willing to put him on the pitch at that time because it would have meant cup-tying (him)."

"It was a difficult experience," Herdman added. "But he enjoyed it. He enjoyed the environment. I think Alphonso Davies is his favourite player and he made some good relationships with Johnny David and some of the young players. And certainly he connected well with the staff. There was never really a doubt that he wasn't going to come back in. This window we'll be looking to get him minutes."

Koleosho was not one of the six substitutes used in Friday's 2-0 win over No. 48 Qatar in Vienna. That could change Tuesday when the 43rd-ranked Canadians take on a star-studded Uruguay side, ranked 13th in the world, in Bratislava, Slovakia.

Like the Qatar match, it's a friendly so, unlike CONCACAF Nations League play, Koleosho's international future would not be decided if he steps on the field.

Koleosho, who turned 18 on Sept. 15, is still weighing his options.

"But I'm enjoying it here. So we'll just see how things play out," he said.

Herdman has been watching Koleosho's progression with great interest.

"He's started to grow into that Tier 1 (league) player. And that's exciting for Canada," said Herdman.

Koleosho is an attacking winger who loves to run at and challenge defenders.

"It's something I've been doing since I was young," he said. "I love taking players on and trying to go at the goal and score as much as I can."

The June camp aside, Koleosho has been impressed with the Canadian organization.

"Everything has been smooth," he said.

Koleosho already had a taste of the U.S. setup, having been with the American under-16 team in 2019.

He was 17 when he made his La Liga debut in May, coming on as a substitute in Espanyol's season-ending goalless draw at Granada.

"When I was on the bench and I heard the crowd, I'm not going to lie, I was a little nervous," he said of his first-team debut. "When they told me to go warm up, I ended up becoming pretty calm. And when I stepped onto the field, I didn't really notice anything. I was just focused on playing.

"And then after the game, I got to sit and think about it. It was a pretty special moment."

He has been training with the first team this season. He played against Celta Vigo and Rayo Vallecano last month in the first two games of the campaign but got injured before the next match — against Spanish powerhouse Real Madrid.

Last season, he helped Espanyol's under-19 team reach the Copa del Rey Juvenil final where it lost 2-1 to Real Madrid after extra time. He also played for Espanyol's B team.

"I love it there. I really like my coaches and my teammates and everyone there," he said. "It's been pretty fun so far."

It wasn't always that way. Koleosho was by himself when he arrived in Spain. His family remained in the U.S. but visited him several times a year.

While he is fluent in Spanish now, he didn't speak the language when he got there.

"So I feel like I've matured and grown up a lot faster than I would have if I had stayed in the U.S. with my family and friends."

He ended up in Spain through one of his coaches, who was originally from Barcelona. The coach convinced Koleosho's family that he would learn more in Spain.

"I wanted to do it. It didn't matter how old I was," Koleosho said.

This report by The Canadian Press was first published Sept. 25, 2022