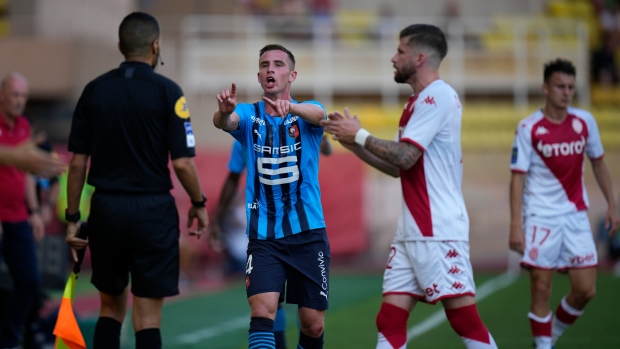 PARIS (AP) — Neymar and Paris Saint-Germain's high-powered attack put on another impressive display in a 5-2 win over Montpellier in the French league on Saturday as Kylian Mbappe opened his account but missed a penalty in his return from a groin injury.

Neymar scored twice to take his tally to three goals in two league games for the defending champion on a night when Lionel Messi was held scoreless. The Brazil striker was also PSG’s best player in preseason friendlies as he looks to find his peak form for the World Cup in Qatar, which starts in November.

PSG also netted five goals in its league opener and Montpellier opted for a low defensive block to deny space for the hosts. But the pressure was too much for center back Falaye Sacko, who diverted Mbappe’s off-target shot into his own net in the 39th minute.

Sacko then handled the ball in the 42nd when Lionel Messi juggled the ball on a dribbling run. Neymar wrongfooted Jonas Omlin to convert the subsequent penalty for a 2-0 lead.

PSG capitalized on another blunder to add a third goal in the 51st. Mbappe blocked Omlin’s pass and found Achraf Hakimi, whose deflected cross was headed home by Neymar.

Far from his best level, Mbappe still found the net with a flick from a corner in the 69th.

In his PSG debut, Portugal midfielder Renato Sanches rounded off the scoring with a first-time effort in the 88th.

Omlin pulled off some outstanding saves to frustrate PSG for more than 30 minutes. The Swiss goalkeeper saved a penalty from Mbappe in the 23rd after Jordan Ferri had handled the ball. He then turned around the post a curling free kick from Messi in the 26th.

Montpellier scored with a close-range effort from Wahbi Khazri in the 58th and a half-volley from Enzo Tchato in stoppage time.

Earlier, Rennes’ defensive issues were exposed as it squandered the lead to draw 1-1 with 10-man Monaco.

In a clash between two contenders for European spots, Monaco forward Breel Embolo pounced on a heavy touch from goalkeeper Dogan Alemdar to equalize with a sliding effort in the 73rd.

Rennes striker Gaetan Laborde opened the scoring by converting a rebound in the 59th.

Monaco was down to 10 men in the 15th when midfielder Youssouf Fofana was red-carded for a stamp on Martin Terrier’s ankle.

“We are extremely disappointed,” Laborde said. “When you play with 11 men against 10 almost the entire game, you must come away with three points. It was tense in the dressing room.”

Despite its numerical superiority, Rennes looked shaky at the back. Embolo proved a magnet for fouls and Joe Rodon and Arthur Theate were booked for holding the forward in the 21st and the 23rd, respectively.

Steve Mandanda also received a yellow card in the 31st for catching Embolo in the face while attempting to punch the ball away. The Rennes goalkeeper made amends by stopping the subsequent penalty taken by Axel Disasi before denying Krepin Diatta in the 36th.

However, Mandanda picked up a knock and was replaced by Alemdar at halftime.

Monaco goalkeeper Alexander Nubel helped salvage a point by turning Baptiste Santamaria’s long-range strike around the post in the 27th and parrying a close-range header from Terrier in the 28th.