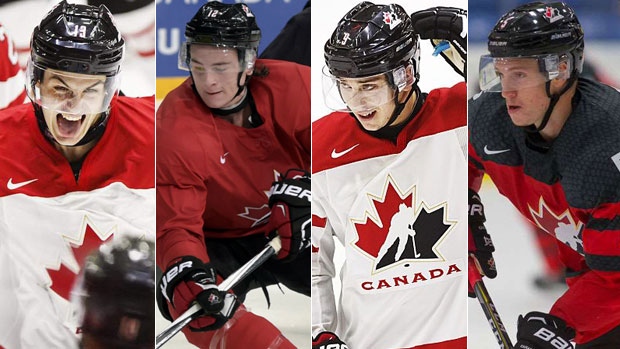 Mathew Barzal and Dylan Strome were among the headliners named to Hockey Canada's 32-man selection camp roster on Tuesday for the 2017 World Junior Hockey Championship.

Barzal, a 2015 first-round pick of the New York Islanders playing with the WHL's Seattle Thunderbirds, and Strome, who played seven games with the Arizona Coyotes this season before being sent back to Erie of the OHL, are among five players returning from the squad that finished sixth at last year's tournament. Other returnees include defenceman Thomas Chabot and forwards Julien Gauthier and Mitchell Stephens.

Also named to the roster was Brandon Wheat Kings centre Nolan Patrick, considered by most scouts to be the top prospect in next June's NHL draft. Patrick had four goals and nine points in six games this season before being sidelined with an upper body injury and is expected to be ready for the start of camp on Dec. 11.

"Congratulations to the 32 players named today to the National Junior Team selection camp roster," said Hockey Canada vice-president of hockey operations Scott Salmond in a statement. "With the number of talented players across Canada, it is a difficult process to get to this point.

"We are confident that the 22 players who emerge from this camp will wear the Team Canada jersey with pride, and give Canada the best opportunity to play for gold on January 5."

Hockey Canada will hold its four-day selection camp in Blainville, Que., from Dec. 11-14, playing two games against a U Sports all-star team and a game against the Czech Republic before finalizing its roster.

Canada opens the tournament in Toronto on Boxing Day against Russia.