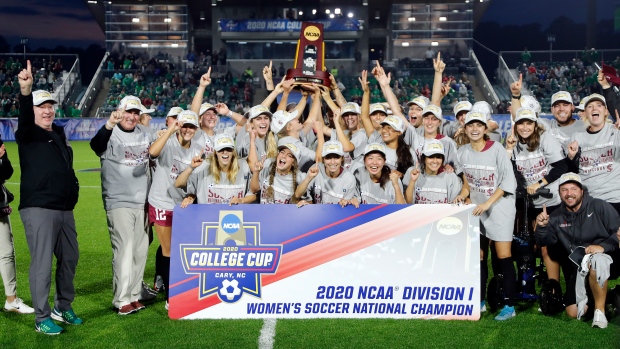 CARY, N.C. (AP) — Izzy D’Aquila made her attempt and Santa Clara claimed the NCAA College Cup championship on a penalty shootout after a 1-1 draw with Florida State on Monday.

Two of Florida State’s penalty attempts hit the post, opening the door for 11th-seeded Santa Clara, who last won a national title in 2001.

Jenna Nighswonger scored for top-seeded Florida State in the 63rd minute but Kelsey Turnbow tied it with a goal for Santa Clara in the 84th. The Broncos prevailed 4-1 on penalties.

It was the third straight match to go to a shootout for the top-seeded Seminoles, who won national titles in 2014 and 2018. They defeated Virginia on penalties after a scoreless draw in the semifinals.

Santa Clara advanced to the title game on a 3-1 semifinal victory over second-seeded North Carolina.

The Broncos were making their its first trip to College Cup since 2004. The Broncos won the NCAA title in 2001 with a 1-0 victory over North Carolina.

Turnbow’s shot for the Broncos in the 30th minute in the was deflected by freshman goalkeeper Cristina Roque as a light rain fell.

Nighswonger finally broke through in the 63rd minute with a blast from outside the box than hit the far post and glanced into the goal. It was her fifth goal of the season.

Turnbow scored the equalizer in the 84th minute when a defender slipped and gave her an opening for the goal, her 10th of the season.

It was the sixth time that the national championship game had gone to overtime. Only twice has the title match gone to penalties.

This season was especially challenging for the Broncos because of the coronavirus restrictions in Santa Clara. They team played just seven regular-season games this spring after the Pac-12 postponed the fall season.

The Seminoles secured a spot in the NCAA Tournament last fall, when they won the ACC Tournament title.

Former U.S. national team players Aly Wagner and Brandi Chastain, who both played for Santa Clara, were among the fans in the crowd in Cary. Chastain’s husband is Jerry Smith, coach of Broncos.