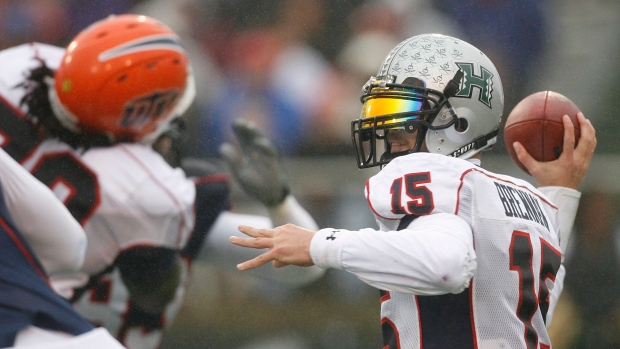 Former Hawaii standout quarterback Colt Brennan has died at the age of 37, the Honolulu Star-Advertiser's Stephen Tsai confirmed on Tuesday.

A native of Laguna Beach, CA, Brennan was a finalist for the 2007 Heisman Trophy that was won by Florida quarterback Tim Tebow.

TMZ Sports confirmed that Brennan was in California at the time of his death, but no cause of death has been given.

Brennan helped lead the Rainbow Warriors to an undefeated 2007 regular season and the program's first ever WAC title.

In his three seasons at Hawaii, Brennan set a score of NCAA records, including most 400-yard games (20), the two-season record for most touchdown passes (96) and most points responsible for in a season with 385.

Brennan's 131 TD passes are fourth-most all-time and he is sixth all-time in passing yards with 14,193.

Brennan was drafted in the sixth round of the 2008 NFL Draft by Washington, but never appeared in a regular-season game.

After his release from Washington, he subsequently signed with the Oakland Raiders, the United Football League's Hartford Colonials and Saskatchewan Roughriders. Brennan did not see game action with any of the three teams.

In 2010, Brennan was in a serious car accident that left him with a traumatic brain injury. He encountered a series of legal troubles in the ensuing years including charges of driving under the influence, drug possession and filing a false police report, the latter of which Brennan's lawyer claimed was a result of lingering issues from the accident.