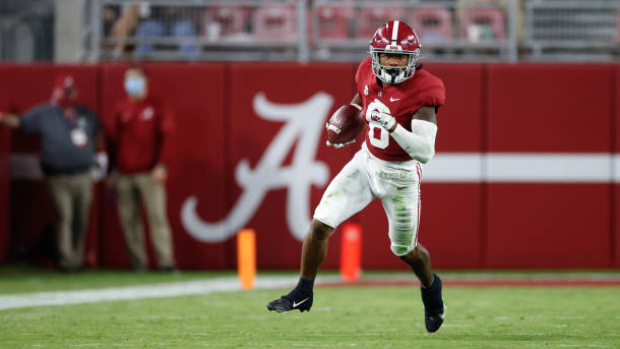 John Metchie had a breakout 2020 sophomore season of college football, winning a national championship and putting himself on the radar as a potential National Football League first-round pick.

On Monday, the Alabama receiver added winning the Cornish Trophy as the outstanding Canadian in NCAA football to his resume.

Metchie, who played his early football while growing up in Brampton, Ont., finished second on the Crimson Tide in receptions (55), yards (916) and receiving touchdowns (six), behind only Heisman Trophy winner DeVonta Smith, the recent 10th overall pick of the Philadelphia Eagles.

Another Alabama receiver, Jaylen Waddle, who missed much of last season with an injury, went sixth overall to the Miami Dolphins.

It was the second year in a row that Alabama has had multiple wide receivers taken in the first round, a path Metchie is being projected by many to follow as early as next spring should he chose to leave school after his junior season.

Metchie, the brother of Calgary Stampeder defensive back Royce Metchie, was born in Taiwan and lived in Ghana before coming to Canada at age six, where he started his football journey with the Brampton Bulldogs program.

He played his high school football in Maryland and New Jersey to better position himself for opportunities in the NCAA.

Metchie’s success continues the recent trend of Canadian players rising to prominence at elite NCAA football programs, including Metchie’s childhood teammate Josh Palmer, a recent third-round selection to the Los Angeles Chargers who played at the University of Tennessee.

The Cornish Award, named after former University of Kansas and Calgary Stampeders running back Jon Cornish, was first awarded in 2018. University of Ohio quarterback Nathan Rourke was its first and second winner.

Oklahoma State running back Chuba Hubbard, a recent fourth-round pick of the Carolina Panthers, won the award a year ago.

The competition for this year’s Cornish Trophy is a snapshot of the unprecedented depth and success Canadians are enjoying in NCAA football, with Oklahoma State linebacker Amen Ogbongbemiga, a recent free-agent signee by the Chargers, receiving more first-place votes than Metchie.