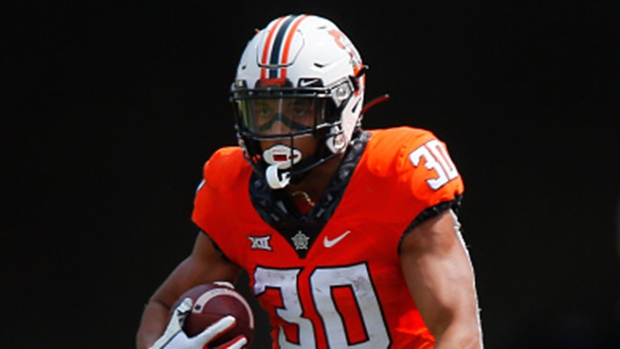 Chuba Hubbard is once again up for the Jon Cornish Trophy as the most outstanding Canadian football player in the NCAA.

The 2019-20 recipient was one of six finalists for the 2020-21 honour named by Football Canada on Thursday.

The annual award, voted on by members of the media and pro scouts, is normally given out prior the NFL and CFL Drafts, but with FCS football extending into May, the decision was made to push back the process.

A native of Sherwood Park, Alta., Hubbard appeared in seven games last season for the Cowboys, his junior year. He rushed for 625 yards on 133 carries with five touchdowns. Hubbard was taken in the fourth round by the Panthers in last week's NFL Draft before being selected in the fifth round of the CFL Draft by the Calgary Stampeders. Hubbard was the NCAA's leading rusher in 2019.

Ogbongbemiga appeared in 11 games for the Cowboys last season. He recorded 50 tackles, 2.5 sacks and recovered a pair of fumbles. After going undrafted in the NFL Draft, Ogbongbemiga signed with the Los Angeles Chargers. He was taken with the eighth overall selection of the CFL Draft by the Calgary Stampeders.

In his sophomore year, Metchie appeared in 13 games for the national champion Crimson Tide. He hauled in 916 yards on 55 catches with six TDs. He expected to return to Tuscaloosa for his junior season.

Addae is also expected back with the Mountaineers in 2021. In 10 games for West Virginia last season after a transfer from New Hampshire, he recorded 38 tackles, two interceptions and a forced fumble.

Jackson was First-Team All-Big Ten in 2020, finishing his Haweyes tenure with 42 games played. He appeared in eight games in 2020 at left tackle. Undrafted in the NFL Draft, Jackson signed as a free agent with the Los Angeles Rams. The BC Lions took Jackson with the 15th overall selection of the CFL Draft.

In his senior year in 2020, Palmer appeared in 10 games for the Vols. He recorded 33 for 475 receiving yards and four TDs. Palmer was taken in the third round of the NFL Draft by the Chargers.

The Cornish Trophy is named after former standout Stampeders running back Jon Cornish and has been awarded in conjunction with the Canadian Football Hall of Fame since 2017.

Ohio quarterback Nathan Rourke was the winner of the award in 2017 and 2018.