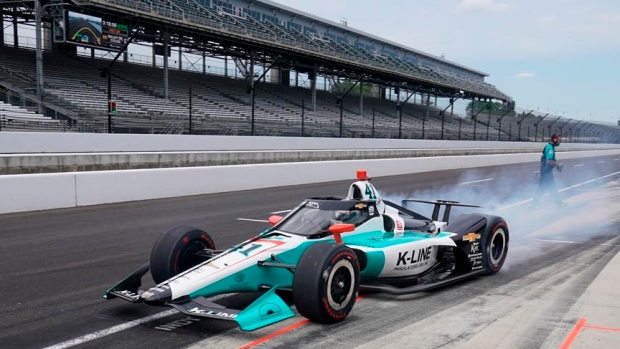 When Dalton Kellett first signed with A.J. Foyt Racing in early 2020, he spoke about wanting to learn from the team's wealth of experience on the IndyCar circuit.

Kellett, from Stouffville, Ont., was able to draw on the Foyt team's collective knowledge on May 22 as he took the 30th and final spot in qualifying ahead of this Sunday's Indianapolis 500.

Kellett thought he was outside of the top 30 qualifying laps when he was told by his team to move into the priority lane and take one more lap, which ultimately guaranteed him a spot on the starting grid at the premier race in the IndyCar season.

"It's super competitive in IndyCar and sometimes other teams have been able to make it work for them and this time we were able to use our experience," said Kellett. "The team definitely tapped into the experienced managers and strategists that we have here."

How Kellett made the cut is complicated.

Kellett was holding on to the final spot on the qualifying grid, but sitting alone in his car he was under the mistaken impression that former Indy 500 champion Will Power had bumped him from No. 30 based on average qualifying lap time. However, Power’s most recent entry didn’t count because it was not one of the top 30 best times of Day 1 of qualifying.

So when the Canadian moved into the priority lane and put himself out on the track for one last qualifying lap, all he had to do was not crash and hope De Silvestro’s final run didn’t best his.

"As far as strategy calls, that was one of those cool moments," said Kellett. "Looking back at it it was the big drama for that day.

"That's why qualifying is so exciting here for us and the fans."

The 105th running of the Indianapolis 500 will be Kellett's second appearance in the race. Although he competed as a rookie in last year's event, 2020 wasn't a typical Indy 500.

Because of COVID-19 restrictions the 2020 edition of the race was moved from its usual Memorial Day weekend spot on the IndyCar schedule to August. When it was held, most of the traditional pomp and circumstance was cancelled or altered and there were no fans in the stands.

Kellett, who lives in Indianapolis, said that of all those customary practices he's most looking forward to sitting in on the driver's pre-race meeting, which is usually open to the public but was not in 2020.

"No other race that we go to has that kind of thing where the fans come to the driver's meeting," said Kellett, who added he looks forward to the traditional pre-race parade returning in the future.