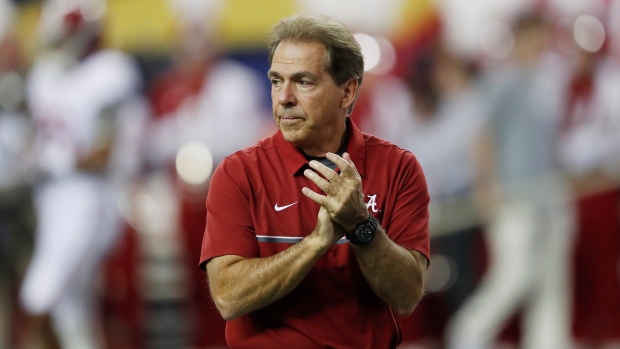 Alabama announced on Monday a three-year extension for their legendary head coach that will take the 69-year-old Saban through the 2028 season.

Saban's current base salary of $8.425 million will increase annually throughout the deal.

"[His wife] Terry and I are pleased and happy to sign another contract extension that will keep us in Tuscaloosa through the end of our career," Saban said in a statement. "Our family calls Tuscaloosa and the state of Alabama home, it's a place where our roots now run deep. This agreement gives us the chance to continue to impact the lives of the young men and their families who choose to play football and get an education at Alabama."

Since joining the Crimson Tide in 2007, Saban has led the team to six national titles - including the most recent with a 52-24 demolition of Ohio State in this past January's title game - and seven SEC titles with a cumulative record of 165-23 over 14 seasons. He is second all-time in wins in program history behind only Bear Bryant.

Prior to coming to Alabama, Saban spent time as head coach at Toledo, Michigan State and LSU with whom he won the 2003 national title.

The Fairmont, WV native also spent two seasons as the head coach of the Miami Dolphins from 2005 to 2006.