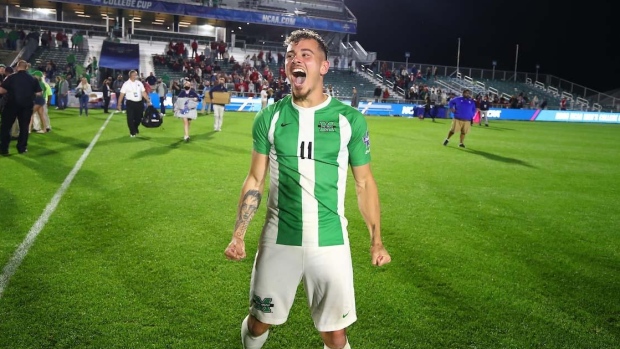 Indiana was making its 16th overall trip to the championship game. The Hoosiers were trying for their ninth title and first since 2012.

Roberts , who was drafted by Sporting Kansas City earlier this year, also scored the lone goal — on Marshall’s only shot — in the team’s semifinal victory over North Carolina on Friday. He finishes the season with five goals.

Marshall had eliminated top-seeded Clemson on penalties and then downed Georgetown in the quarterfinals.

Herbert Endeley scored in the 79th minute and Indiana advanced to the championship with a 1-0 semifinal victory over Pittsburgh on Friday night.

The Thundering Herd, boosted by a large contingent of fans, peppered Indiana goalkeeper with shots, but goalkeeper Roman Celentano made seven saves, including his dive to deflect Vinicius Fernandes’ shot to the corner in the 23rd minute. Celentano had 10 shutouts going into the final.

Victor Bezzera’s free kick was stopped by Semmle in the 49the minute, but Indiana was offside. Semmle finished with one save.

The men’s College Cup has gone to overtime 17 times, and seven times it has gone to penalties.

Indiana has been to the College Cup 21 times, more than any other program in the tournament’s history.

Both the men’s and women’s NCAA Tournaments, delayed from the fall because of the coronavirus pandemic, were held entirely in North Carolina to cut down on travel and avoid the different local restrictions nationwide.