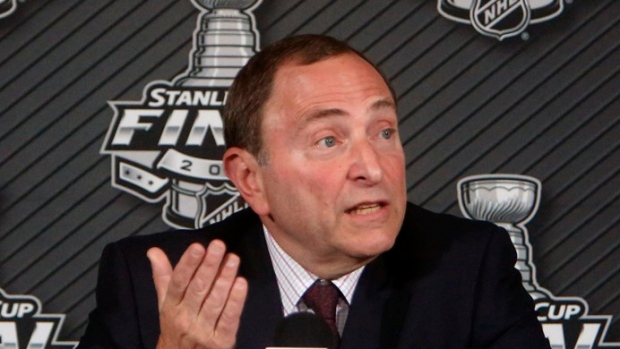 TAMPA, Fla. - While the Pittsburgh Penguins could be sold and the NHL may soon embark on a formal expansion process, commissioner Gary Bettman insisted neither the Arizona Coyotes nor the Florida Panthers were moving.

Bettman refuted recent reports that the Coyotes were having problems with their lease in Glendale and rumours that the Panthers could be a candidate to relocate.

"I don't know why publications make those things up, even under the guise of a rumour," Bettman said at his annual Stanley Cup final news conference. "The Panthers are not filing for bankruptcy. I don't know where these stories come from, but they're not true."

What is true is that Penguins owners Ron Burkle and Mario Lemieux hired Morgan Stanley to "oversee a review of their strategic options." Bettman deferred comment to the team, which confirmed the report about an hour after he spoke at Amalie Arena.

"We conduct periodic reviews of our business and, because we have received several inquiries about the franchise in recent years, we decided to engage Morgan Stanley for their insight and counsel," Lemieux and Burkle said in a statement released by the Penguins. "After buying the team out of bankruptcy, ensuring its long-term future in Pittsburgh and creating a strong foundation for continued success, we believe it is time to explore our options."

Lemieux said "regardless of what happens," he and Burkle would retain an ownership stake and that he would remain involved with the organization.

Prospective Las Vegas owner Bill Foley hopes to own an NHL team in the near future and on Tuesday announced that Hockey Vision Las Vegas sold over 11,500 season-ticket deposits as part of its drive. Bettman said he would report that figure to the board of governors later this month when they meet in Las Vegas.

"Assuming that number is accurate, and I have no reason to doubt that, it looks like his drive has had some degree of success, to say the least," Bettman said.

"It would just be a question of possibly looking at the expressions of interest and looking at them a little more seriously than we have," Bettman said.

During his state of the league news conference, Bettman said there would be no change to the compensation policy for coaches and executives that has come under fire in recent weeks. A team must surrender either a second- or a third-round pick, depending on timing, if it hires a coach or executive under contract, even if he had been fired.

Bettman made it clear he wasn't pleased with the rule, saying it was one general managers wanted. It's not going anywhere just yet, meaning the Edmonton Oilers will have to send a second-round pick in one of the next three drafts to the Boston Bruins after hiring Peter Chiarelli.

"We put in effect the new policy with the potential for compensation on Jan. 1 and we'll let it run a full year before we consider doing anything," Bettman said. "At that point in time, the options will be to clarify, to modify or to eliminate. But we'll let it run its course over a full year and decide what, if anything, we want to do."

Bettman said next season's salary cap will be over US$71 million if the Players' Association elects to use its full 5 per cent escalator clause. There is a chance the players choose not to, or they could negotiate with the league for a partial escalator — a complicated decision that will affect many cap teams' situations for next year.

Deputy commissioner Bill Daly said the NHL and KHL had discussions at the world championships in Prague about a "more friendly" transfer agreement. Currently, players under contract in the KHL are off-limits to the NHL, unlike other European leagues that are compensated with development money for players.