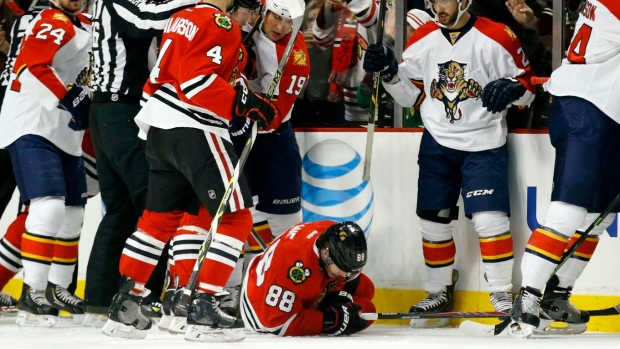 CHICAGO - Blackhawks star Patrick Kane had surgery Wednesday to repair a broken left collarbone, likely sidelining the dynamic forward for the rest of the season unless Chicago makes another deep run in the playoffs.

Kane, who leads Chicago with 27 goals and 37 assists, lost his balance and crashed into the boards after he was cross-checked by Florida defenceman Alex Petrovic with 12:11 left in the first period of Tuesday night's 3-2 shootout victory over the Panthers.

He stayed down on the ice for a short time and was hunched over as he skated to the bench and went straight to the locker room.

The three-month timeline means Kane would be out until the Western Conference finals. The Blackhawks won the Stanley Cup in 2013 and lost to eventual champion Los Angeles in the conference finals a year ago, but it will be quite difficult to make a similar run without Kane, who was working on one of his best seasons.

"You miss a valuable guy, a buddy," coach Joel Quenneville said Tuesday night. "He's having one of those years that are very noticeable. But the guys still got to stick with it. Playing the right way will be emphasized as we go along."

The 26-year-old Kane led Chicago with 20 points in last year's post-season. He had the winning goal against Philadelphia when the Blackhawks won the Stanley Cup in 2010, and won the Conn Smythe Trophy for playoff MVP when they won the title again two years ago.

"I don't think you replace the things that he does with the puck, the attention he gets," teammate Patrick Sharp said. "But one of the strengths of our organization is depth. When a player goes down, you try to collectively try to fill in for him. But you know, as well, as you can't replace Kaner."

The Blackhawks began preparing for the rest of the season when they placed Kane on long-term injured reserve Wednesday and recalled forward Teuvo Teravainen from Rockford of the American Hockey League. The 20-year-old Teravainen, who has two goals and two assists in 15 games with Chicago, is regarded as one of the NHL's top prospects.

The Blackhawks also assigned Trevor van Riemsdyk to their top minor league affiliate. The rookie defenceman, who had left knee surgery in November, likely will return after a conditioning stint with the IceHogs.

Kane's move to long-term injured reserve also creates some room with the salary cap ahead of Monday's trade deadline. But a couple of possible targets for the Blackhawks were on the move on Wednesday, and it's unclear what direction general manager Stan Bowman will take after the massive loss.

Chicago visits Florida on Thursday and Tampa Bay on Friday, and then returns to for a three-game homestand beginning Monday against Carolina.