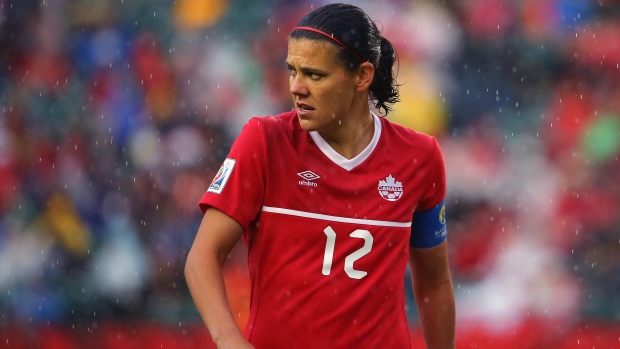 SAO PAULO - Four years ago the Canadian women's soccer team captured the hearts of fans back home during the London Olympics. A controversial and gut-wrenching semifinal loss against the top-ranked Americans in extra time was followed by a resilient win over favoured France in the bronze medal game.

It will be a hard to replicate that magical run to the podium, but captain Christine Sinclair believes the latest incarnation of Team Canada is more than equal to the task.

"You look at the tournament and there's half a dozen or so teams that have a legitimate shot of being on the podium and I'd put our team right up there," said the 33-year-old Sinclair, who will be competing in her third Olympics. "That's our goal, to prove that London wasn't a fluke and we're a power."

Sinclair is one of just six Canadian players in Brazil who also played in London. For that group, which includes Melissa Tancredi, Diana Matheson, Kadeisha Buchanan, Desiree Scott and Sophie Schmidt, the 2012 campaign remains a rallying point.

"It definitely motivated us," said Scott. "To get on the podium was a dream of ours and something in our wildest dreams we didn't think we could accomplish, but we did it through hard work and all of our devotion to the game. Knowing that we got on the podium four years ago and with the changes our team made now, I think we're in an even better place and that fuels our fire."

"The key mantra is: if you're good enough, you're old enough and it's your time. This time doesn't come back," Herdman said during a news conference on Tuesday. "You're not here to prepare for the next Olympics, you're here to deliver for Canada, because you're good enough."

Nine of the 18 players on Canada's Olympic roster are 23-years-old or younger with 12 poised to make their Olympic debuts. And yet based on how vividly some of the rookies recall the London Olympics you get the sense they've already banked some experience.

"Four years ago, watching Canada on the world stage, I saw the game against France and saw them get the bronze medal and it inspired me," said 21-year-old Ashley Lawrence. "Now, four years later, I’m here representing my country. Now, for me, it's my role to inspire the next generations in Canada and bring home a medal."

Herdman describes the mix of young and old on Team Canada as a "lovely synergy." And all the players seem to have a real belief that another long run is possible. But Herdman, who took over Canada's national program in 2011, cautions that it won't be easy. Canada is ranked No. 10 in the world and has been drawn into a group that features No. 5 Australia and No. 2 Germany. The top two teams will advance to the quarterfinals with two other teams, that next best finishers among the three groups, also getting through to the knockout stage. Zimbabwe, ranked No. 93, is also in Canada's group.

"Certainly, we're not favourites to be on the podium, I think people would put us as rank outsiders," Herdman said. "But we've been there before and when you've been there before you know what it takes and there's something about the spirit and chemistry behind the scenes that's more important than tactics."

Canada's team chemistry does seem to be very strong. Social media has been full of inside jokes and pranks between players and even one on Herdman during a training session.

"Our culture is unmatched," said 21-year-old Janine Beckie, one of the final cuts in 2012. "I don't know if any team could be closer than us."

And maybe that's why there's a sense of comfort among the group about where they stand as they prepare for the opening game Wednesday against the Aussies.

"I think any Canadian team loves that underdog feeling," said Tancredi. "It's that scrappy underdog that just doesn't give up and I think that describes this team so perfectly. I don't know, it just brings this different kind of beast out and we're looking forward to showing what we have."

A quiet confidence was evident on Tuesday as the team went through its final training session ahead of the Olympics. And despite all the underdog talk, Herdman had to admit there is a sense this group believes it will accomplish a great deal.

"No one expected us to (be on the podium) four years ago, it was just completely out of the blue," he said. "This year we carry a little bit of expectation."

"We're ready," said Lawrence. "We're ready to show all the work we've put in and just show the world what Canada's made of."