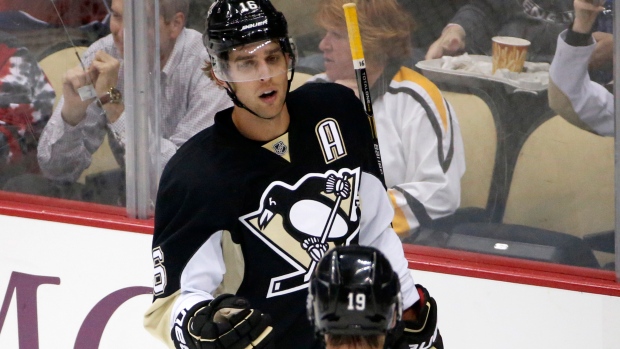 The Vancouver Canucks have acquired Brandon Sutter and a third-round pick from the Pittsburgh Penguins in exchange for Nick Bonino, Adam Clendening and a 2016 second-round pick.

Originally selected 11th overall by the Carolina Hurricanes in the 2007 NHL Draft, Sutter has scored 98 goals and 87 assists in 495 career games with the two clubs. The Penguins acquired him from Carolina in the deal that sent Jordan Staal to the Hurricanes.

Sutter has one year remaining on a two-year deal he signed with the Penguins prior to the 2014-15 season worth an average annual value of $3.3 million. He is slated to become an unrestricted free agent after this coming season.

Bonino, 27, scored 15 goals and 24 assists in 75 games with the Canucks in 2014-15, his first with the Canucks. The team acquired him in the 2014 off-season from Anaheim in the trade that sent centre Ryan Kesler to the Ducks.

Originally a sixth-round pick (173rd overall) of the San Jose Sharks at the 2007 NHL Entry Draft, Bonino has scored 48 goals and 73 assists in 264 career games with the Ducks and Canucks.

Bonino is entering the second season of a three-year contract he signed prior to the 2014-15 campaign worth an average annual value of $1.9 million.

Clendening, 22, appeared in 21 games with the Canucks and Chicago Blackhawks in 2014-15, scoring one goal and three assists. The Canucks acquired him via trade mid-season in exchange for defenceman Gustav Forsling.