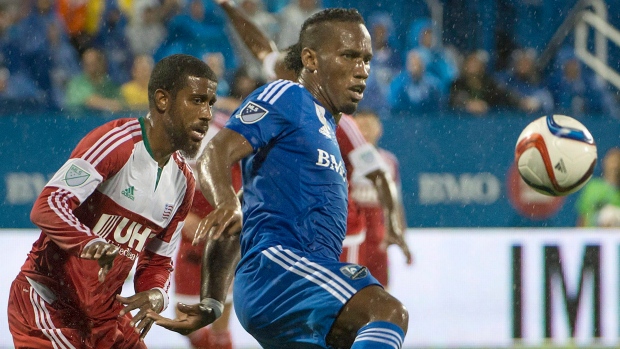 MONTREAL - Didier Drogba is building a new legend with the Montreal Impact.

The 37-year-old striker had a goal and set up another for Dilly Duka as the Impact ended the New England Revolution's six-game winning run with a 3-0 victory in a driving rainstorm on Saturday night.

Drogba has four goals and an assist in four MLS games since joining the Impact in late July. And the club has gone undefeated in four games since Mauro Biello replaced Frank Klopas as head coach.

"It's just the ability to play off him," Montreal goaltender Evan Bush said of the former Chelsea star. "The playmakers we have around him are good, so he doesn't have to do everything himself. But he's able to move our team up and give everybody confidence."

The Revolution, whose eight-game unbeaten run came to a close and who wasted a chance to clinch a playoff spot, looked reluctant to challenge the brawny Drogba, an imposing figure in the middle for a Montreal squad that was labouring for goals before his arrival.

"I think he is world class," said Heaps. "He was excellent tonight.

"He held the ball up. It was almost impossible to take the ball away from him, and he imposes himself on the game in areas where you're vulnerable. When he's able to hold a player off and turn and bring other players into the attack, they become very dangerous."

The sellout crowd of 20,801 certainly thought so as they went wild every time he touched the all.

Johan Venegas also scored for Montreal (1-11-6), which will see some lineup changes for home games Wednesday against Chicago and next Saturday against D.C. United.

Both holding midfielders may be out, as Calum Mallace left early in the second half with a left foot or ankle injury and Marco Donadel, already on a yellow card, was sent off in the 72nd minute after a slide into Revs defender Andrew Farrell and will be suspended.

It was a second straight game in which Montreal scored after having a man sent off. Kyle Bekker got a goal after Ambroise Oyongo was ejected in a 1-1 draw in San Jose on Wednesday.

"It says a lot about the mentality we have now and the coaching staff we have," said Nigel Reo-Coler, who replaced Mallace. "It's a never say die attitude.

"There's that constant belief that we can score goals with the quality we have on this team."

Still, Biello was not pleased with the indiscipline.

"We've got to do a better job of managing that," he said. "You hurt your team in those moments."

The Impact struck early as Ignacio Piatti dropped a pass to Venegas for a shot that went off defender Steve Neumann's leg and took a dip over Bobby Shuttleworth in the fifth minute. It was the Costa Rican in-season signing's first MLS goal in his seventh game.

New England's best chance came off a set play from a corner and defender Laurent Ciman headed a Charlie Davis shot off the line in the 31st.

In the 59th, Drogba drew a free kick and then scored on a shot that went in off the chest of New England midfielder Kelyn Rowe. Four minutes after Donadel went off, Drogba slipped a pass to Duka on the left side to pad the Montreal lead.

"For us to break their streak and continue the way we've played builds confidence going forward," said Biello.

Ciman was back after missing three games, one on international duty for Belgium and two from suspension.