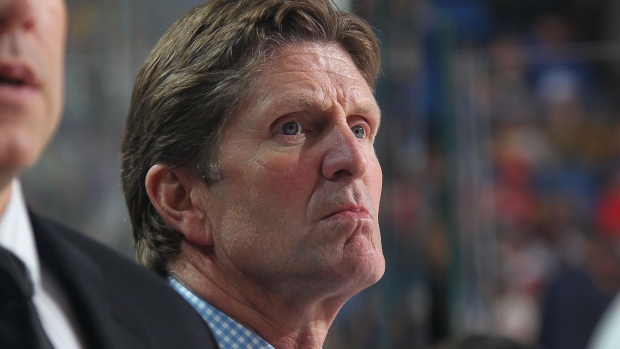 Babcock confirmed to Dreger that he's received at least two head coaching offers so far this off-season. The coach's contract has run out in Detroit and he currently has a window to meet with other clubs. Aside from his interest from the Red Wings, Babcock has also met with the Buffalo Sabres and is believed to have spoken with the Toronto Maple Leafs.

Dreger discussed with the two men Babcock's hockey future and asked about about his method for choosing a team.

Throughout the process Babcock and Holland have remained in touch. They took in a Grand Rapids Griffins playoff game together (Detroit's AHL affiliate) immediately after the Red Wings season finished, and are now together at the World Championship.

Holland said he is of course hoping that Babcock returns behind the Red Wings bench but is also respecting his coach's opportunity this off-season.

"I don't want Mike to wake up and think that maybe there's a better opportunity out there so this is a process to allow him to decide if there's a better fit for him out there and then he should pursue it. I'm hoping that we're the best fit."

For Babcock's part, he's taking his time evaluating the best fit. The Stanley Cup-winning coach said a lot of factors ultimately go into his decision.

Babcock is expected to become the highest paid coach in the league this summer, but said that money isn't something that he's been focusing on throughout his selection process.

"I'm not concerned about that part because anywhere you go you're going to be paid. So I don't think that's an issue and Ken's assured me of that."

It's been reported that Babcock has a soft deadline of May 25th to make a final decision, but the two-time Olympic Gold Medal winner said we won't have to wait that long to find out where he'll be coaching next year.

"To be honest with you that date to me is going to be moved up. When I get home from the World Championship and sit down; enough time already, let's get on with it. I bet you by the 20th I'm going to know what I'm doing.