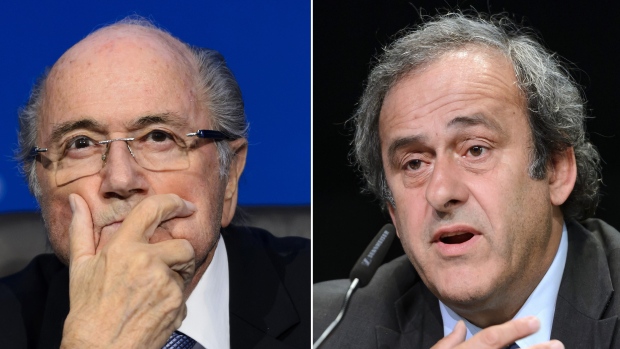 FIFA ethics prosecutors said Tuesday they will appeal to increase the bans, arguing they are too lenient.

"The investigatory chamber intends to appeal against the decision against Mr. Blatter and Mr. Platini at the appeal committee of FIFA," the prosecution unit said in a statement.

The counter-challenge revives the prospect of life bans, which both men revealed had been recommended by investigators before their ethics hearings last month.

Blatter and Platini have said they will also appeal the eight-year sanctions handed down by four ethics judges who rejected charges of bribery and corruption. Instead, Blatter and Platini were banned for a range of lesser violations of the FIFA ethics code, including accepting or receiving gifts and conflicts of interest.

They deny wrongdoing over Blatter approving a $2 million payment from FIFA to Platini in 2011 as backdated salary without a contract.

Platini worked as a presidential adviser to Blatter from 1999-2002 but did not claim the money owed to him for more than eight years, when FIFA was no longer obliged by Swiss law to pay him.

The case has ended Platini's bid to succeed his former mentor as FIFA president in an election on Feb. 26.

Blatter wants to clear his name and host the election meeting in Zurich as a farewell to FIFA after more than 40 years.

Blatter and Platini have said they expect their cases will fail at FIFA before they pursue further appeals at the Court of Arbitration for Sport.

Manilal Fernando was judged to have bribed Asian officials to vote for Mohamed bin Hammam of Qatar in a 2009 election for a FIFA executive committee seat. The loser in that bitterly fought contest, Sheikh Salman bin Ibrahim al Khalifa of Bahrain, is now a candidate for the FIFA presidency.