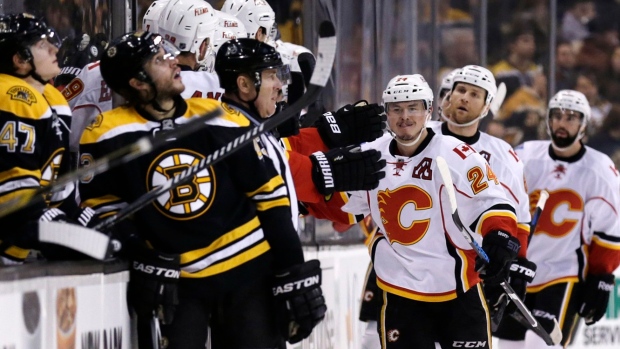 BOSTON - Sean Monahan ended Calgary's scoring drought in Boston that lasted more than eight years. Then, one of the newest Flames snapped the club's even longer run of futility on the road against the Bruins.

David Schlemko clinched Calgary's first victory in Boston since December 2003 when he scored in the eighth round of the shootout in the Flames' 4-3 win over the Bruins on Thursday night.

"You know, it feels good to come in and be able to contribute right away," said Schlemko, claimed off waivers by the Flames on Sunday. "It was great. A shootout is always exciting — a little nerve-racking — but glad we came out on top."

Schlemko ran a wild sequence of fakes on Boston goalie Tuukka Rask, who wasn't ready for the last one as Schlemko tapped the puck into the net.

Jiri Hudler and Johnny Gaudreau also scored for the Flames in regulation, and Karri Ramo made 34 saves, then allowed just one puck past him in the shootout when Patrice Bergeron scored to open the seventh round.

"We needed him to make some big stops, and he made them," said Calgary defenceman Kris Russell, who had an assist on Monahan's goal with 1:11 left in the first period. "He's been incredible. I thought we did a little bit better job of helping him out tonight.

"We didn't give up too many second and third chances as we had in previous games, but at the same time, knowing that we need him to make that big stop, he's there."

Brad Marchand and Milan Lucic scored for the Bruins, and Loui Eriksson added a third-period goal to tie it 3-3 and force overtime.

Rask finished with 29 saves and helped Boston salvage a point by getting the game to overtime as Calgary pushed in the final minute of the third period.

Boston has been clinging to the second wild-card spot in the Eastern Conference playoff race. As pleased as the Bruins were to skate away with one point, missing out on the second one could prove costly.

"The challenge of our lack of finish is probably the biggest concern right now," Boston coach Claude Julien said. "If we finish around the net, it's over. I think we had some good chances in the second period."

Hudler tied it 2-2 with 5:34 left in the second period when he slapped in a long rebound. Gaudreau gave Calgary its first lead on a wrist shot from the right circle that got through traffic and beat Rask 4:59 into the third period. Calgary's second power-play goal of the game gave the Flames a 3-2 lead, which Ramo could only sustain for so long.

"I think that the fans saw quite a game," Calgary coach Bob Hartley said. "That third period was like a ping pong game. It was back and forth. The teams were going for it. We understand the importance of the two points, and it was two teams that were very desperate."

Eriksson, who shot wide on a one-timer with Ramo stuck on the opposite post earlier in the third, poked in a rebound to tie it with 9:16 left in the third. Chris Kelly had tipped the puck in on Ramo, who stopped it but couldn't get to the rebound before it bounced to Eriksson.

Eriksson had a great chance to give Boston the lead again a few minutes later with a backhand, but Ramo dived across the crease and smothered the puck.

"I thought I had some really good opportunities to score a goal, and the puck kept kind of bouncing," Eriksson said. "That extra second, they came back and made a save. So yeah, it's too bad. It would be nice to get the two points."

The Bruins committed three penalties in the last four minutes of the first period. Calgary converted on the second when Monahan scored with 1:11 left as Matt Bartkowski sat for hooking. Carl Soderberg's hooking penalty with 16 seconds left carried over into the second. Boston was able to kill it, then regained the lead on Lucic's one-timer 2:30 in.

NOTES: Monahan's goal ended a scoreless stretch of 208 minutes, 25 seconds for the Flames in Boston. Alex Tanguay had the last goal for the Flames at the Bruins when he scored at 10:24 of the third period on Oct. 19, 2006. ... Schlemko made his debut with the Flames, his third team this season. Arizona and Dallas both placed him on waivers. ... The Flames rallied after trailing 3-1 in the third period and beat the Bruins 4-3 in overtime on Feb. 16 in Calgary. ... Marchand opened the scoring with a goal 7:46 into the game.