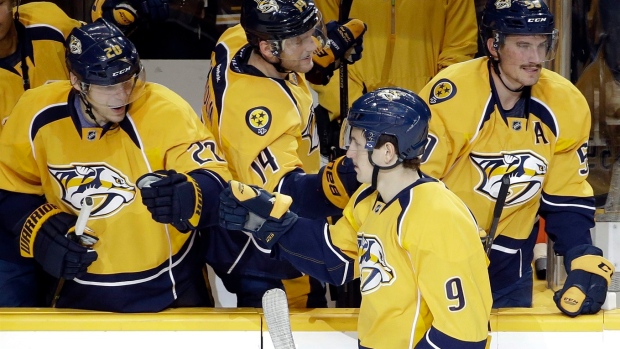 Rinne made 37 saves and Filip Forsberg scored at 3:55 of overtime to lift the Predators over Edmonton 1-0 Thursday night, handing the Oilers their eighth consecutive defeat.

Nashville won its third straight thanks in large part to Rinne, who stopped Jordan Eberle on a penalty shot early in the extra session.

In the opening period, Rinne made nine saves before the Predators registered their first shot on goal. It was Rinne's second shutout of the season and the 34th of his career. His 15 wins lead the NHL.

"Early on, if it weren't for him, we would have been in trouble," Nashville coach Peter Laviolette said. "The first eight or nine minutes, I think everybody would admit we were not sharp. It was a really strong effort by him."

Viktor Fasth had 24 saves for Edmonton, which fell to 0-11-2 against Western Conference teams.

"We haven't been able to take many positives lately, where at the start of the season, we felt good about the way we played even though maybe we came out on the short end of the stick," Oilers coach Dallas Eakins said. "This one for the group was a step forward even though we couldn't get both the points."

Seconds after Forsberg hit the crossbar with a shot and Nashville defenceman Roman Josi hit the post, Forsberg spun to free himself from a defender and beat Fasth with a wrist shot from the left circle.

"It was a really long shift, actually. I was pretty tired when I got the last shot there, so I was just trying to spin off the guy and try to hit the net," Forsberg said. "I was fortunate that it went in."

The rookie's 10 goals lead the team.

Rinne's best save came 13 seconds into overtime when he denied Eberle's penalty shot after Predators captain Shea Weber was called for closing his hand on the puck while it was in the crease. Rinne made the ensuing stop on Eberle with his left skate against the post.

"He is really nifty in penalty shots. I think that he is one of the better shooters stats-wise in the NHL in penalty shots and shootouts," Rinne said. "I thought he got a little bit too close to me and I was able to get my leg over there and he didn't put it over my leg."

Eberle thought he had Rinne beat.

"I just had to get it upstairs," Eberle said. "I think when you go down that way, it's extremely tough and you feel like you let your teammates down."

The Predators finished 0 for 5 on the power play. They are an NHL-worst 1 for 37 at home this season with the man advantage.

Nashville centre Mike Fisher appeared in his first game of the season. Fisher sustained an Achilles tendon injury while training over the summer and missed the first 21 games.

Oilers forward Matt Hendricks was injured at 2:12 of the first period when he blocked a shot from Weber. The shot hit Hendricks in the left leg.

After the game, Eakins said X-rays were negative, but Hendricks' inability to bend his knee kept him from returning to the ice.

NOTES: Oilers D Justin Schultz was a healthy scratch for the first time this season. ... Nashville C Matt Cullen sat out with an upper-body injury and is day to day. ... The Predators concluded their season series with Edmonton, winning all three games.