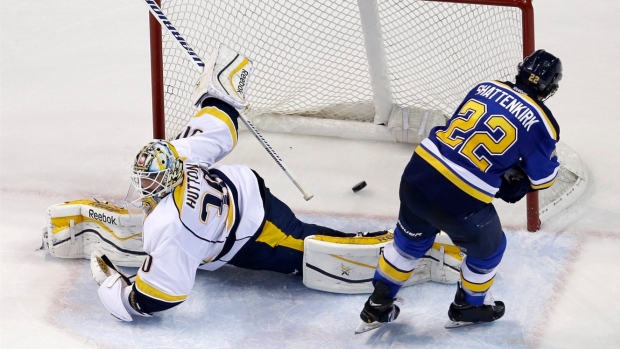 Shattenkirk scores winner in shootout to lift Blues to win over Predators , The Canadian Press

BOCA RATON, Fla. - Unhappy with the amount of games ending in shootouts, NHL general managers are recommending the addition of three-on-three overtime beginning next season.

"The consensus from all of us is, while we obviously are going to continue the shootout, we are going to see if we can make it a little less frequent," commissioner Gary Bettman said Tuesday on the second day of the general managers meeting. "That's something we're going to discuss with the competition committee because, obviously, we want the Players' Association input on how we're going to approach it."

Players must approve any change, and the joint NHL/NHLPA competition committee and board of governors must sign off to make three-on-three overtime happen. How it works is still a matter of debate.

One idea is to use the American Hockey League's format: start a seven-minute overtime period with a four-on-four setup and then go to three-on-three at the first whistle after the three-minute mark. The other one is to simply start the five-minute OT at three-on-three, something that has worked in Sweden to reduce shootouts.

"At the end of the day, we're happy as a group here going either way," said Ken Holland of the Detroit Red Wings, who has long been a proponent of three-on-three overtime. "We think that at our level it's going to have a dramatic impact."

Among all games that go to overtime, the AHL has cut down on those decided by a shootout by 40 per cent. That's the kind of impact the NHL would love to see.

"The shootout is very good for the fans, and it's an enjoyable part of the game, but (for) hockey purists or when playoff points are on the line, maybe more games being finished with more players on the ice than a one-on-one competition is something we'll look to do," said Doug Armstrong of the St. Louis Blues.

Adding more time is one issue with the AHL format, and it's unclear if players would support that. Holland said he would go back to Detroit to talk to players and coach Mike Babcock about what they prefer, and other GMs will do the same.

Referees will then be able to look at a video monitor in the penalty box and consult with the situation room in Toronto before rendering a decision. It's an improvement but can't be as black and white as goal reviews.

"You can't have certainty on this, but the type of situation which this is intended to address is the puck goes in the net, nobody makes a call but it turns out there was contact that nobody saw," Bettman said. "It would be an attempt to get the better call, but it would ultimately still be the official's call and it would still be his judgment."

All questionable overtime goals would automatically be reviewed, Bettman said, adding that some of the details still need to be fine-tuned.

Puck over the glass penalties will be subject to challenges, too, though those would go straight to Toronto. That's not easy, either, as director of hockey operations Colin Campbell said that pucks going over the glass and hitting the netting are "probably the most difficult reviews to determine through video."

General managers discussed emergency goaltender protocol after the March 3 incident when the Florida Panthers lost Roberto Luongo and Al Montoya to injuries. Nothing was finalized.

"We're working on that," Bettman said. "It doesn't happen very often, every 40 years or so."

Shootouts are much more frequent than that and occur too often for the liking of GMs. That's why the call was finally made to recommend a three-on-three setup in overtime.

"There's traction just in general to have this change," said Peter Chiarelli of the Boston Bruins. "We're all kind of in agreement this is a direction we want to go. We're going to, as a group, push this forward."