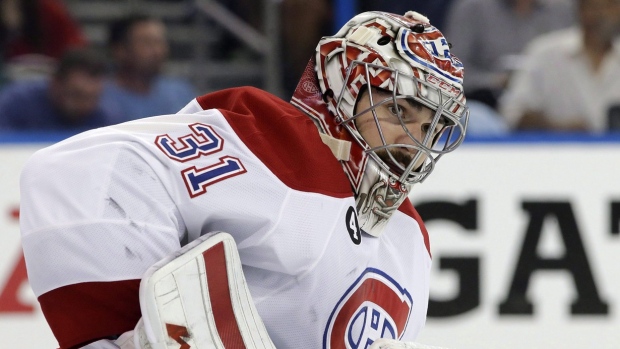 TORONTO - Carey Price was the big winner at the NHL Awards in June and the accolades keep coming.

The stingy Montreal Canadiens star is rated the league's top goalie by EA Sports in its upcoming "NHL 16" video game.

The game gives Price a 94 rating, ahead of Henrik Lundqvist of the New York Rangers and Jonathan Quick of the Los Angeles Kings, who are both given a 93.

A pair of Finns come next with Boston's Tuukka Rask and Nashville's Pekka Rinne both at 92.

The rest of the top 10 is Braden Holtby of the Washington Capitals (91), Sergei Bobrovsky of the Columbus Blue Jackets and Cory Schneider of the New Jersey Devils (both 90), and Semyon Varlamov of the Colorado Avalanche and Frederik Anderson of the Anaheim Ducks (both 89).

Price won the Hart Trophy as the NHL's most valuable player, the Vezina Trophy as the league's best goalie and the Ted Lindsay Award for most outstanding player as voted by the players. He also earned part of the William M. Jennings Trophy with Chicago's Corey Crawford as goalies on the teams that allowed the fewest regular-season goals.