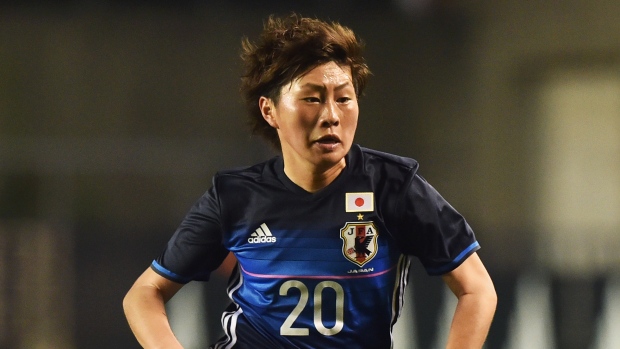 COMMERCE CITY, Colo. — Kumi Yokoyama scored in stoppage time to give Japan a 3-3 tie with the United States on Thursday night in a rematch of the Americans' victory last year in the Women's World Cup final.

"Whenever we play Japan it's always a pretty tight game," Morgan said. "We've played them in big matches and in friendlies. It's always a team we'd love to play in a friendly in a tuneup for the Olympics. This is the perfect type of game for us."

Mana Iwabuchi and Yuki Ogimi also scored for Japan. Japan was reduced to 10 players when Ogimi received a second yellow card and was ejected in the 57th minute.

"It's such a great, competitive rivalry," U.S. coach Jill Ellis said. "The two teams have incredible respect for each other. I said to (my team), 'The Warriors and Cleveland have a game going on but I think this is a bigger rivalry.'"

It looked as if the Americans would prevail again when Horan, from nearby Golden, scored in the 89th minute to give the U.S. a 3-2 lead, but Yokoyama got free to beat goalkeeper Hope Solo.

"That was a little disappointing because it was in our control," Ellis said. "If this helps us in Brazil, it's a tough lesson but I'll take it. Everything we're doing now is to prepare us for the Olympic Games."

The Americans dropped to 11-0-1 this year. The teams will play again Sunday in Cleveland.

Horan is one of three Colorado players on the U.S. roster.

"It's awesome. You want to come into the game and impact it," Horan said. "For the team it was a great goal, but in the grand scheme of things we tied."

Japan, which did not qualify for the Rio Olympics, took an early 2-0 lead.

Iwabuchi ended Solo's shutout streak when she manoeuvred around defencemen Emily Sonnett and Becky Sauerbrunn and curled a shot into the top left corner in the 14th minute.

"Being down 2-0 was some adversity this team needed to face because it's a lot younger of a team than last year," Morgan said. "This was a really great competitor to play us."

The U.S. rallied to tie it on Morgan goals that pushed her career total to 66.

The U.S. took advantage Ogimi's ejection to tie it, with Morgan redirecting Tobin Heath's pass past goalkeeper Ayaka Yamashita in the 64th minute.

The Americans played without World Cup hero Carli Lloyd. She strained a knee April 23 playing for the Houston Dash.