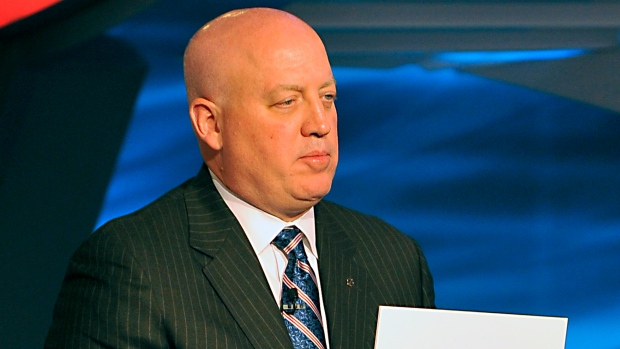 The National Hockey League says the NHL Players’ Association has repeatedly interfered with its attempts to introduce rules over the past 50 years to limit staged fighting, better safeguard players and bolster penalties for dangerous head hits.

NHL deputy commissioner Bill Daly made the allegations in a sworn affidavit filed in U.S. federal court in Minneapolis late Thursday that relates to a lawsuit filed by former players suing the league over its handling of head injuries and concussions.

In the latest twist in the high-stakes concussion case, the NHL asked the court to not certify the case as a class-action suit. Daly’s affidavit was filed in connection with that request.

If Judge Susan R. Nelson certifies the case, it would mean more than 5,000 former players, and the families of some deceased players, would automatically become plaintiffs in the case, drastically driving up the potential liability for the league.

If the court rejects the class-action motion, individual players would have to hire their own lawyers and pursue claims. The court could decide on certification as early as this summer.

Daly testified in the April 26 affidavit that the NHL does not act alone in formulating and introducing rules about discipline for on-ice conduct, player health, equipment or general safety.

“The NHL neither possesses nor exercises unilateral power over [player safety] in the manner Plaintiffs suggest,” Daly wrote. “Since 1967 (when the NHL first recognized the NHLPA as the exclusive collective bargaining representative of NHL players), the League has been obligated by the National Labor Relations Act to negotiate in good faith with the NHLPA over terms and conditions of employment…”

The deputy commissioner added, “A history of the playing rules, supplemental discipline, equipment standards, playing environment characteristics and/or the league’s approach to player safety that fails to consider and account for the NHLPA’s role with respect to these matters is inherently incomplete and profoundly misleading.”

Daly testified that after NHL general managers approved a rule “conceptually” to ban head-only contact with a vulnerable player in June, 2007, “…it was the NHLPA who resisted and objected to a rule change…”

During the June meeting, the competition committee talked about the Ontario Hockey League's approach to hits to the head, noting the OHL had introduced a new rule that purported to penalize all head contact. NHLPA associate counsel and former NHL player Stu Grimson and then-NHL player Brendan Shanahan told the meeting the OHL rule “would be a dangerous path to take” according to Daly’s affidavit. [DALY PAGES 18, 19]

Shanahan and Grimson told the meeting a penalty like the one introduced in the OHL would threaten to take bodychecking out of the game and be difficult to enforce fairly and effectively.

The committee ultimately recommended the league use supplemental discipline and existing rules, an approach that was formally implemented by the NHL's hockey operations department before the 2007-08 season.

Lawyers for the former NHL players have argued in previous court filings that the league has refused to eliminate fighting from the game. Repeated blows to the head from fighting, the plaintiffs’ lawyers said, has increased players’ risk of brain damage.

The NHL alleges it has been stonewalled by the union in attempts to reduce fighting.

On March 9, 2009, then-NHLPA executive director Paul Kelly told a NHL general managers’ meeting that players did not support the elimination or reduction of fighting from the game, according to Daly’s affidavit.

General managers during the same meeting determined players should be assessed a 10-minute misconduct penalty for fighting immediately following a faceoff.

Six weeks later, according to Daly, then-NHLPA executive Glenn Healy told a June 25 competition committee meeting that the proposed rule changes on fighting had been discussed days earlier by “30 of the NHL’s top fighters” at the union’s annual meeting. Healy said the fighters were “offended by the characterization of any fight as ‘staged’ and had been strongly opposed to the 10-minute misconduct for fighting off a faceoff.”

Daly wrote, “Mr. Healy stated that the fighters did not want to be told when and how to fight and felt that the proposed ten minute misconduct rule treated them like circus freaks.” Daly also wrote that Bettman offered his personal support for a staged fighting rule at the time, but to this day the two sides remain in a stalemate.

“As a result of the impasse, to date, no new or additional penalty has been implemented for staged fighting,” Daly wrote.

A year later, NHL general managers in March, 2010 approved Rule 48, which penalized lateral, blindside hits to an opponent where the head was targeted.

Daly testified the NHLPA initially wouldn’t agree to the rule being enforced immediately because of concerns about fairness of enacting a new rule in the middle of season.

In March, 2013, the NHL tried to improve safety regulations for players by introducing a mandatory visor rule, Daly testified. He said that during one competition committee meeting that June, the NHLPA indicated it would only support such a regulation if it exempted current NHL players.

While the former players in the concussion lawsuit allege the NHL has put profits ahead of player safety, Daly testified that the NHL has made players more aware of the dangers of direct blows to the head, has protected players through more robust supplemental discipline, and has properly treated concussed players for decades.

“Concussions in the NHL were not ignored or improperly treated prior to the formation of the [NHL/NHLPA] concussion program in 1997,” Daly testified. “They were routinely diagnosed and treated at the club level by physicians who made medical decisions regarding concussions on an individualized basis for each player based on the physician’s clinical experience, knowledge and best judgment.”

In a motion asking Judge Nelson not to certify the lawsuit as a class action, NHL lawyer Dan Connolly wrote “the NHL and NHLPA have jointly provided warnings to players regarding head injuries and concussions.”

In 2001, the NHL and NHLPA published notices that were posted in all NHL team locker rooms, warning direct blows to the head without head protection “could not only be career ending (i.e. permanent brain injury) but also fatal (i.e. death),” according to Connolly’s motion.

The NHL’s lawyers also cast doubt on the plaintiffs’ argument that some players would not have pursued an NHL career if the league had offered more warnings about the dangers of head trauma.

Connolly wrote, “…hockey players today continue to compete fiercely for the chance to play in the NHL despite significant publicity – including in feature films and press coverage of this very litigation – regarding the alleged risks of head hits. Accordingly, the notion that no proposed class member would have played in the NHL if he received more information about those risks is highly implausible.”

Among the documents filed Thursday by the NHL was a transcript of a March, 2014 interview with then-Calgary Flames enforcer Kevin Westgarth.

“We understand the risks,” Westgarth told The Calgary Herald. “We’re doing it ourselves. We’re not children. We’re not unknowing combatants in this ring. We’re completely aware what can happen and what, at some point or another, will happen.”

The NHL also took aim at the players who are named in the lawsuit.

Connolly wrote in his motion that onetime Boston Bruin forward Dan LaCouture admitted in a deposition for the case that he misrepresented his concussion history during his playing career because he “recognized that [he] had a number of concussions by this point” and was “doing anything [he could] to protect [his] job,” Connolly wrote in his motion.

“A reasonable jury could construe such false statements as evidence of contributory negligence.”