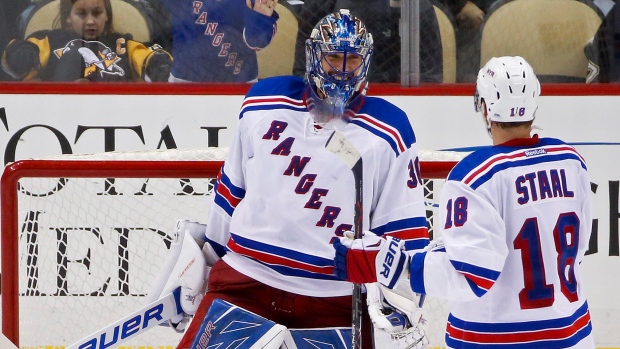 Braden Holtby’s historic chase at the NHL’s single-season win record has been the focal goaltending story for most of the season, and understandably so. Holtby’s been the backbone of much of Washington’s success, and without his steady presence in net it’s almost certain the Capitals wouldn’t have this kind of daylight between them and the rest of the Eastern Conference.

You are likely familiar with the other major goaltending stories of the year – James Reimer’s bounce-back season has deserved plenty of attention, as has the Petr Mrazek revolution in Detroit.

There’s one performance that hasn’t earned nearly enough attention though, and that’s what Henrik Lundqvist has been doing in New York. I think this is largely due to the fact that hockey fans have become accustomed to his dominance. The only Lundqvist stories that ever seem to register on our Richter scale are when he has the occasional off night. Beyond that, we just expect him to outplay just about every goaltender in the league across every season. And when he does, we barely bat an eye.

I think it’s worth pointing out just how good Lundqvist has been this year.  So good, I’d argue he’s the best bet for the Vezina Trophy, even in a year where there are plenty of other worthy candidates outside of the New York City area.

Let’s talk a bit about Lundqvist generally against the rest of the league. Considering the little fanfare, it might surprise you that the Swedish superstar is once again leading the league in 5-on-5 save percentage – even ahead of the above breakout stars who have played most of this season without noticeable flaw. 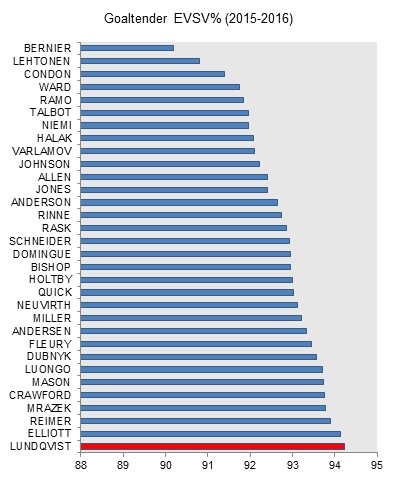 I like to look at save percentage first for the obvious reasons – save percentage does fairly well at capturing actual goaltender performance, where goals-against averages and win/loss records are much more clouded by surrounding team talent.

So, we know that Lundqvist’s raw stop rate is best in the league. But, there are still team effects to consider. We shouldn’t hold a goaltender on a tremendously poor defensive team to the exact same standard as a goaltender on an elite defensive unit. If Lundqvist is facing easier than anticipated shots, we need to calibrate accordingly.

There are a number of ways we can look at this. One of those is to look at the average distance of opposing shooters on a goaltender-by-goaltender basis. It can certainly speak, to some degree anyway, the difficulty of shots faced as opposed to pure volume.

So, do the Rangers protect their goaltender and limit difficult shots? 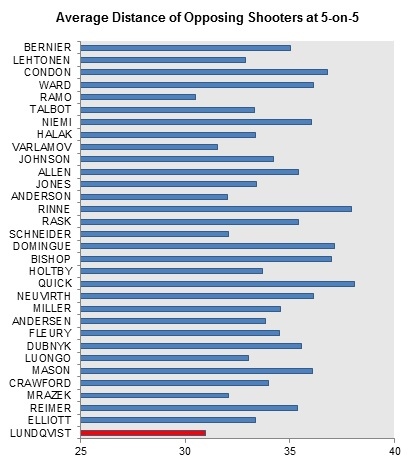 No, they do not. The Rangers actually do a pretty horrific job of protecting their goaltender and shielding him from quality scoring chances against. Only Karri Ramo of the Calgary Flames has seen more difficult shots by pure location. One wonders what Lundqvist’s save percentage would look like in the event that he got, say, the kind of protection Jonathan Quick enjoys in Los Angeles.

From things like shot distance (and shot types – we know ‘rush shots against’, for example, are much more difficult historically to stop), we can start to come up with ways to estimate expected goals against. Some sites, like War on Ice and Corsica, already do just this. I’ll use most of the calculations provided by the latter with one caveat: I’ll be using historical shooting percentages from 5-on-5 game state only to arrive at expected shooting percentages by location. From this, we should be able to reasonably approximate just how many goals a goaltender has saved (or earned) for his respective team.

So, how effective has Lundqvist been in terms of shaving goals? 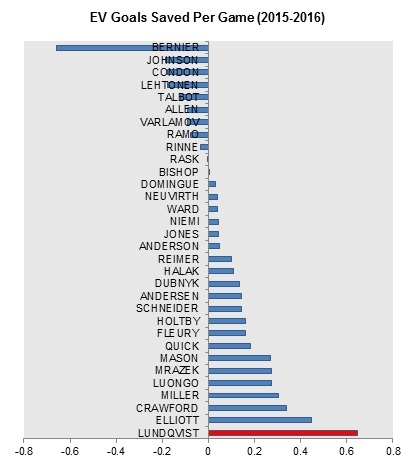 To be clear here: Lundqvist is saving his team about half of a goal every game he plays – my estimate is that the 71 goals he’s actually conceded at 5-on-5 so far this season would look like 105 if a replacement-level goaltender was playing his minutes.

When you remember that one win is worth about six net goals, you realize Lundqvist has nearly added six wins alone to his club. And you don’t need to be a mathematician to know that if the Rangers were six wins in the hole, their 2015-16 story would look awfully different.

There are a lot of fantastic goaltender stories out there this year, but let’s not forget about the one story that’s written the same way every single year – Henrik Lundqvist carrying an otherwise so-so New York Rangers team to another playoff berth by way of Vezina-calibre performance.