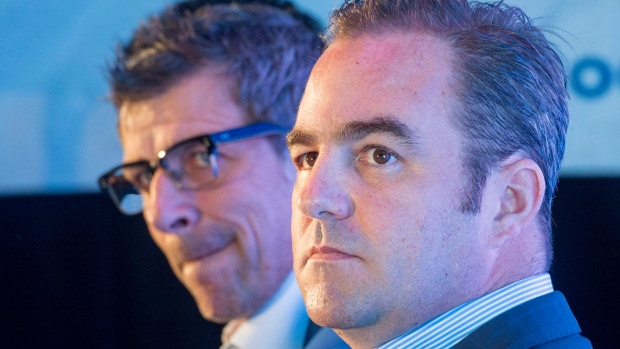 LAVAL, Que. — Montreal Canadiens president and owner Geoff Molson gave his full blessing to the trade that sent the popular P.K. Subban to the Nashville Predators.

Molson took heat on social media from irate fans who opposed the June 29 trade that brought in Shea Weber for Subban in a straight-up swap of star defencemen.

"I'm not surprised how the fans have reacted," Molson said Monday at a news conference to announce that the team's American Hockey League affiliate will move to a new rink in Laval, Que. for the 2017-18 season. "P.K. is a bigger-than-life person on and off the ice and our fans love him and still will love him.

Cullen: Subban is a top-five defenceman

"I appreciate that, but I also appreciate what I've hired (general manager) Marc Bergevin to do and that is to make our team better. I'm confident he's done that."

Not all Montreal fans opposed the move, which landed a physically imposing rearguard who is also a top power play scorer, but it has drawn intense criticism from Subban's many supporters, who liked his style, personality and contributions to the community as much as his play.

Bergevin went on attack after the Canadiens missed the playoffs in 2015-16, acquiring Weber, gifted bad boy right winger Alexander Radulov, gritty winger Andrew Shaw and depth defenceman Zach Redmond. It cost him Subban, Lars Eller, some draft picks and a good deal of his popularity among the pro-Subban camp.

Molson approved it all.

"I'm looking forward to seeing the evolved team on the ice and I think our fans will really appreciate the improvements."

Miller: Canadiens have a game changer in Weber

TSN's Gord Miller talks about what Shea Weber will bring to the Montreal Canadiens.

Bergevin seems to be hoping it will all blow over and any fans turned off by the deal will be won back when Weber starts clearing the front of Carey Price's net and scores from the point with his bullet shot.

"We made a hockey decision to go ahead with Shea Weber and we believe we're a better hockey team today, so we wish P.K. the best and now we'll move forward with Shea Weber," said Bergevin.

Meanwhile, the Canadiens are looking forward to making life better for their top prospects by moving their AHL team, the St. John's IceCaps, into the Place Bell arena that is nearing completion in Laval, a suburb just north of Montreal.

It follows the recent trend among NHL clubs to keep their top farm team close to home. Toronto and Winnipeg are among NHL teams whose AHL club plays in the same city.

"It's going to be much easier to move players back and forth and much easier for our general manager and his team to drive to Laval and watch their players in development," said Molson.

The team moved to St. John's from Hamilton two years ago on a two-year agreement with an option for a third year. The announcement has the Newfoundland and Labrador capital seeking a replacement team.

"We were fully aware and prepared for today's announcement by the Canadiens and we have been actively seeking a new AHL partner and exploring other options with other leagues for some time now," IceCaps president and CEO Danny Williams said in a release

Place Bell, which reportedly will cost $200 million, is owned by the city of Laval but will be operated by the Canadiens. It includes a 10,000-seat main rink with NHL-size ice surface, plus a 2,500-seat rink with international-size ice and a 500-seat community rink. It will also have a gymnasium, sports medicine facilities and retail space. It has extensive parking and is a block from a subway stop.