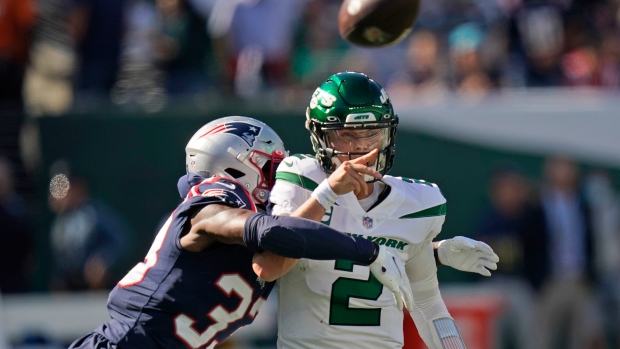 The New York Jets will be without the services of Zach Wilson for the near future.

ESPN's Adam Schefter reports the rookie quarterback will miss the next two to four weeks with a sprain in his posterior cruciate ligament.

An MRI confirmed a sprained PCL for Jets’ QB Zach Wilson, who now is expected to be sidelined 2-4 weeks, per source.

Wilson, 22, picked up the injury during Sunday's blowout 54-13 loss to the New England Patriots. With the team down 17-0 in the second quarter, the BYU product took a hit from Pats defensive end Matt Judon. He would leave the game and not return.

After the game, Wilson said he felt a "pop" in his knee.

"The pain really isn't there," Wilson said. "It's just feeling like something is a little off as far as being loose and unstable."

The second overall pick of the 2021 NFL Draft, Wilson has struggled in his first pro season.

Through six games, Wilson has thrown for 1,168 yards on 104-for-181 passing with four touchdowns and a league-leading nine interceptions. He's also been sacked 19 times, the second most in the NFL this season.

Former Western Kentucky quarterback Mike White, who took over for Wilson on Sunday, is expected to get the start when the Jets (1-5) host the Cincinnati Bengals (4-2) on Sunday.