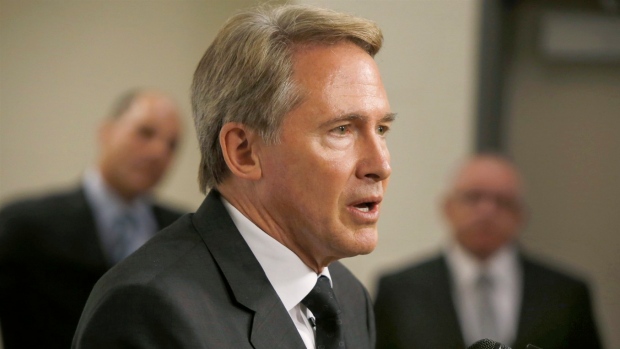 Citing the fact the Penguins have “underachieved,” and are equally as close to the bottom of the Metropolitan division as the top, GM Jim Rutherford admitted he’d been pondering a coaching change since mid-November.

“We’ve underachieved,” Rutherford told reporters. “This team has more to give.”

Sullivan’s first order of business is figuring out how to get Sidney Crosby and the Penguins’ offence back on track. They are built by Rutherford to run like thoroughbreds but Johnston seemed to tug at the reins. Only three teams (Toronto, Philadelphia and Anaheim) have scored fewer goals than Pittsburgh (67) this season.

Crosby, 28, is on pace for a career-worst 56 points. The only player ever to be ranked No. 1 in TSN’s Top 50 player poll has been nothing more than average this season, held off the scoresheet in 15 of 28 games - pointless more times than he’s been in entire 82-game seasons.

“Certainly, we do expect more offence,” Rutherford told reporters. “We have enough offensive players that should be producing more.”

Sullivan seems to have a plan, which centres around letting Crosby and Malkin run free.

“I’ve always believed that you have to allow your top players the latitude to make plays and act on their instincts,” Sullivan told the Pittsburgh Tribune-Review. “There’s a fine line as a coach between making sure you stay out of the way in certain circumstances but you provide the necessary structure so you don’t become a high-risk team.”

The Penguins were risk-averse under Johnston, who was put on notice this week when Rutherford publicly questioned his handling of 18-year-old forward Daniel Sprong and said the team had “definitely underachieved.” Johnston lasted just a season and one-third, leaving with a 58-37-15 record after squeaking into the playoffs on the final weekend of last season.

The timing of Johnston’s firing makes Rutherford’s decision to not seriously court pending free agent coach Mike Babcock last summer all the more perplexing. Despite the record-setting contract Babcock received in Toronto, there was a belief in the hockey community that Babcock had a strong interest in working with Crosby.

Many thought Crosby was stifled by Johnston’s demand to play a 200-foot game and the inability of Pittsburgh’s defencemen to efficiently get the puck out of the zone. Then, there were off-ice questions.

Johnston, 58, arrived as Rutherford’s second choice after Willie Desjardins chose Vancouver. Perhaps because of that, Johnston never seemed to grab the attention or respect of Pittsburgh’s dressing room, a sentiment hinted at when Rutherford said in his press conference he thought players “for the most part” respected Johnston. It wasn’t exactly a ringing endorsement.

“I see Mike Sullivan as a guy that is a really demanding, take-control guy,” Rutherford told reporters. “He reminds me a lot of Peter Laviolette.”

Rutherford shouldered blame for Pittsburgh’s questionable roster construction, with an unbalanced payroll heavily favoring offence over defence. The Penguins spend less on defence than all but two of the NHL’s 30 teams and Rutherford said he “didn’t get the defencemen who were necessary.” He said he would also like to “add another player or two” to the mix in coming weeks.

Rutherford told reporters the benefit to hiring Sullivan is Penguins’ players unfamiliarity with him. Associate coach Jacques Martin will move from the press box to the bench and assistant coach Rick Tocchet will remain in place. Assistant coach Gary Agnew was also part of Saturday’s purging.

Sullivan, 47, was mostly known in NHL circles as John Tortorella’s right-hand man over the last decade. He followed Tortorella as an assistant with stops in Tampa Bay (2007-08), New York (2009-13) and Vancouver (2013-14). Sullivan went in a different direction this June, with Tortorella about to enter his second straight season without a job.

Sullivan led the Baby Penguins to an 18-5-0-0 mark this season. He is now the fifth active NHL coach with ties to Wilkes-Barre/Scranton, joining John Hynes, Dan Bylsma, Michel Therrien and Mike Yeo.

At just 35 years of age, Sullivan was the youngest NHL head coach back in 2003-04 with Boston. He led the Bruins to a Northeast division crown with a 41-19-15-7 record that season before they were eliminated in the first round by Montreal. Sullivan was fired after the following season by incoming GM Peter Chiarelli when the Bruins failed to adjust to the new style of play after the NHL lockout with a 29-37-16 record.

“I’ve never been more prepared for the NHL than I am today, through some of the experiences that I’ve been through both as a head coach and assistant coach at both levels,” Sullivan told the Pittsburgh Tribune-Review. “You learn a lot from your successes as well as your failures.”

Sullivan’s debut will come on Monday night when the Penguins host the Capitals.

“We never know what a coaching change is going to do,” Rutherford told reporters. “We do need to get some more production out of some guys. I believe he is the guy who can come in and really take control.”