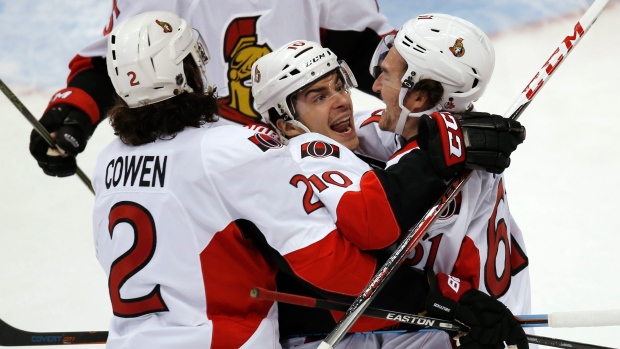 DENVER - Craig Anderson made sure Shane Prince got to celebrate his first NHL goal with a victory.

Anderson made 20 of his 40 saves in the third period, Prince had two goals and an assist for his first career goal, and the Ottawa Senators held on to beat the Colorado Avalanche 5-3 Wednesday night.

Zack Smith, Kyle Turris and Mika Zibanejad each had a goal and an assist for Ottawa, which has won four straight.

Anderson stopped 33 shots in a win at Dallas on Tuesday and set a season high for saves against his former team after a furious finish. Colorado tried to overcome a three-goal deficit in the third but fell short.

"That's just an indication of back-to-back and travels," Anderson said. "It's a tough place to come up to in altitude. They had much fresher legs than us."

The Senators have a chance to sweep their three-game Western Conference trip with a win at Arizona on Saturday.

"We talked after we got the win in Dallas that we had a chance to make this a great road trip," coach Dave Cameron said. "You win the first of three, you have a chance for a great road trip. A win in there and great becomes a reality."

Nathan MacKinnon and Gabriel Landeskog each had a goal and an assist, and Chris Wagner scored his first NHL goal for Colorado.

The Avalanche were down 4-1 entering the third but rallied to get close. Landeskog and MacKinnon scored 1:36 apart to make it a one-goal game. Reto Berra came off for an extra skater with 2:03 left, but Zibanejad scored into the empty net.

"It's nice that we came back and had a good third, but we're down by three going into the third so we should be desperate and should have dominated," MacKinnon said. "There's no moral victories. We need points. This was a good opportunity to get them and we didn't show up."

A poor start hurt Colorado but helped Prince finally score a goal as he gave the Senators a 2-0 lead in the first 10 minutes of the game. His backhander from the right circle trickled through Semyon Varlamov's pads and just over the line at 5:54. Prince also tipped in Smith's centring pass at 9:01.

"I haven't been able to get a bounce so far this year," Prince said. "So my mindset was to throw everything on net and shoot every chance I get. Sure enough, first shift I get a little squeaker there and the floodgates open."

Wagner, who was claimed off waivers from Anaheim on Nov. 15 and made his Avalanche debut two days later, answered 1:35 later when he backhanded a loose puck past Anderson to cut the lead to 2-1.

Turris restored the two-goal lead with his team-leading 11th of the season 1:48 into the second period. Berra came on for Varlamov, who allowed three goals on 15 shots.

"That was a bad goal, the first one, coming off a seven-game road trip," Avalanche coach Patrick Roy said. "When I saw the first one going in I said, 'C'mon Varly. That can't happen.' That was not a dangerous shot at all. It was coming from the boards and it really hurt us a lot. It took some momentum off of our game."

Berra stopped the first nine shots he faced, but Smith made it 4-1 with his fifth goal of the season at 18:13 of the second. Berra finished with 12 saves.

NOTES: Colorado C Matt Duchene had his seven-game point streak stopped. ... Avalanche C John Mitchell missed his fifth straight game with an oblique strain. He has missed eight games total with the injury. ... Ottawa D Patrick Wiercioch was out for the third straight game with an upper-body injury. ... Avalanche RW Alex Tanguay (knee) has started skating but is still several weeks from returning.

This story has been corrected with Anderson's save totals in third period and overall.