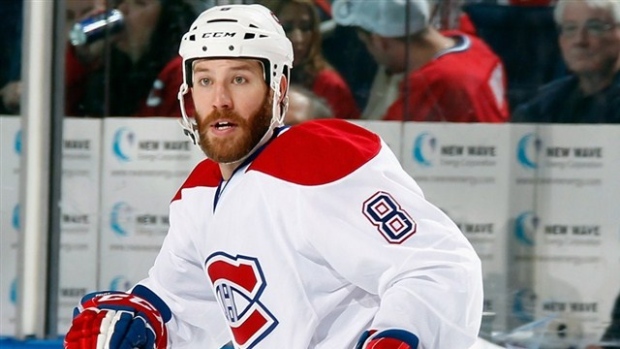 Montreal Canadiens forward Brandon Prust apologized on Tuesday for the comments he made about referee Brad Watson following a Game 2 loss on Sunday.

Prust, who was fined $5,000 for his comments, said he wishes he could take back what he said about the official.

"I was emotional," Prust told the media on Tuesday in Tampa. "It was uncalled for. We got in a heated exchange and that should have stayed between us. I've always played by the code on and off the ice, I'm a pretty honest player. On Sunday I crossed the line."

"Brandon Prust's post-game comments were both baseless and demeaning of a referee whose 20-year career in the League has been marked by professionalism, integrity and a high degree of respect from players, coaches and management," said NHL Senior Executive Vice President of Hockey Operations Colin Campbell.

"I had just gotten in a fight, we had just lost 6-2 and five minutes later I was doing interviews. I wasn't myself. My emotions were -- my heart was beating, I was agitated -- and I shouldn't have been doing the interviews.

"I am apologizing for everything. I am apologizing to Brad. It should stay out on the ice. We got heated and I should know more than anybody what happens out there stays out there and there's a code and there's an honour. After the game I was not myself. I was fired up, I was out of my mind. If I could do it all over again, I probably wouldn't have even of went in to do interviews. But what's done is done, and we move on."

Head coach Michel Therrien confirmed that he met with Prust about the incident.

"We met this morning and he wanted to apologize... I thought he did the right thing," said Therrien.

Prust, 31, claimed on Sunday that Watson verbally assailed him following a roughing penalty late in the first period of Tampa Bay's 6-2 win over the Habs in Montreal.

"I thought the original call was kind of soft and I let him know on the way to the box," said Prust.

Watson assessed Prust a two-minute unsportsmanlike conduct penalty on top of the original minor when the pair appeared to exchange words, but Prust claims that their interaction was initiated by the referee.

"He kept provoking me," said Prust. "He came to the box and called me every name in the book. He called me a piece of you-know-what, a mother-effer, a coward and said he'd drive me right out of this building. I kept going, 'Yeah, okay. Yeah, okay. Yeah, okay.' He kept on me. He kept on me. I kept saying, 'Yeah, okay.' I wasn't looking at him. He teed me up. That's the ref he is. He tries to play God. He tries to control the game and he did that tonight."

Prust discussed disagreements that he has had with Watson on other occasions.

"We've both been around awhile. We've always sometimes gotten into it, we can both be emotional out there sometimes. Sometimes it's not a good thing," Prust explained. "I have to learn to be better that way and keep my emotions in check because it's not really helping anybody. It's definitely not helping me or my team."

Prust said on Tuesday he hopes there's no fallout with other officials.

"That's just a fingers-crossed scenario, but who knows what's going to happen?" said Prust. "If I could go back and redo it, I would. But you can't. We've got to live with it, and we focus on the road ahead."

Game 3 of the series is Wednesday night in Tampa.