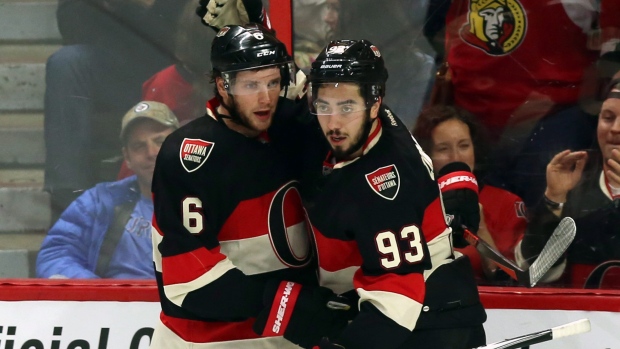 In the standings, Dave Cameron’s Ottawa Senators appear to have picked up right where they left off last season. They’ve amassed 17 points in 14 games, good enough for second place in the Atlantic Division.

But while things might appear calm on the surface, there are some discouraging signs underneath that are reminiscent of the Paul MacLean era.

No game captured the spirit of Ottawa’s odd start to the season like Saturday night’s overtime loss to Carolina. At first pass, it seemed like Ottawa was done in by the hockey gods. They led for most of the night, conceding the game-tying goal with mere seconds left on the clock. Minutes later, they were burned by a picturesque shot in overtime by Jordan Staal.

In reality, the 3-2 overtime loss flattered Ottawa. A scrappy Carolina team speed-bagged the Senators all night long, particularly so in the offensive zone. Carolina fired 85 shots at the direction of Andrew Hammond, with a whopping 40 of those coming from dangerous or semi-dangerous scoring areas.

A quick look at the game’s shot chart gives you an idea of how one-sided this affair was (via HockeyStats.ca):

It was a byproduct of many things. Cameron pointed to the team’s poor faceoff performance (36 per cent) as the culprit. While that certainly grades out as a poor showing in the circle, I think it is fairly low on the list of reasons for Ottawa’s struggles - both Saturday night and this season so far - in the defensive zone.

For one, the faceoff is really just the start of a series of many puck battles. Isolating on the outcome of a given set play versus the hundreds and hundreds of other events over the course of a game seems specious.

It’s also hard to ignore what research tells us about faceoffs – specifically, that the outcome of a faceoff is almost entirely mitigated after about 10 seconds.  (Also: Ottawa’s above 50 per cent on the draw so far this season. Even if it did explain their poor showing on Thursday, it doesn’t seem like it would explain what’s occurred in many of the other games.)

A significantly bigger problem (one Cameron might also agree with, to be totally fair) is that this team is bleeding shots and scoring chances. The Carolina game, it should again be noted, wasn’t an aberration. It was a continuation of what’s become an increasingly disturbing trend.

Let’s flashback to the 2014-15 season for just a moment, when the scrutiny on MacLean’s coaching future in Ottawa seemed to get more intense with each passing game. There were two reasons for this. One, he seemed to have lost an ability to connect with at least a portion of his players – exit interviews in the season prior were unkind, and generally referred to his coaching methodology as some variation of “stubborn.” Two, his team was miserable in the defensive zone. They couldn’t prevent entries. They couldn’t exit the zone with control. Time and time again, their blueline was victimized by pressure and turned the puck over in prime scoring areas.

It manifested in the shot differentials. At the time of his termination, only the trying-to-lose Sabres were conceding more shots against on a game-by-game basis.  Making matters worse, the team was no longer able to offset horrific defence with up-tempo offence. Their differentials took a nosedive in emphatic fashion, and general manager Bryan Murray eventually made the switch to Cameron.

MacLean was fired, at least in part, because of that avalanche of poor possession. So it’s definitely worth noting that Cameron’s team has been out-attempted at the exact same rate through the first 14 games of the season. It’s alarming.

Are scoring chances any different?

Well, that looks faintly better. Still, you are talking about a team that is, on average, six shots and two scoring chances in the red every single night. Barring fantastic goaltending and/or elite individual and team-level shooting talent, that’s pretty difficult to overcome. It’s also a far cry from where this club was just six months ago.

So, we know that there is an end-effect – this team is struggling more than the standings would suggest. And we know that the issue seems to be on the blueline, where the team can’t alleviate pressure from dangerous areas.

But can we identify any potential drivers, particularly as it relates on the backend? Perhaps there is a troublesome pairing that’s really dragging this team in the muck. (I say this half-knowing the answer, but it is worth showing.)

Say what you will about Karlsson/Methot not being elite (they’ve been just good to start the year) or the underwhelming performance of Ceci/Wiercioch to meet expectations from last year (also a fair point), but the Cowen/Borowiecki duo is just killing this team. The pairing is either dead last or near dead last in basically every major statistical category, and it’s crippling team performance.

This is exactly the kind of data point you want if you’re Cameron. It’s an easy fix. Simply breaking up this duo for any of a number of combinations should rectify some of what’s killing this team at 5-on-5, if only because the numbers they are posting are (a) almost impossibly bad; and (b) either near-last or dead-last in every major statistical category.

The mark of a great coach is to intervene before things start to get ugly. With Ottawa, there are plenty of warning signs that their decent start in the standings isn’t very indicative of their true performance. Troubleshooting potential drivers (like an appalling third pairing) is essential at this point because the status quo likely won’t cut it by the time December and January roll around.