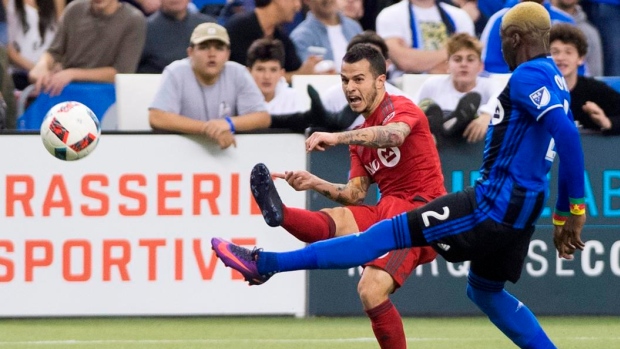 Known as the “401 Derby,” the ongoing battle between the Montreal Impact and Toronto FC has added a thrilling element to the overarching theme of Toronto versus Montreal sports rivalries.

Though relatively short on history, the intensity of their matchups has ramped up over the last few years and, with both Major League Soccer teams peaking at the same time, the competitiveness has been exciting to watch for fans on both sides. Here’s a timeline of their history and head-to-head encounters.

Although the first incarnation of this rivalry technically began in 1971 with the Toronto Metros and Montreal Olympique, frequent changes in the North American Soccer League prevented the two teams from playing one another on a frequent basis.

In the 1990s, the original Montreal Impact was formed by the Saputo family and, through many different variations of leagues, rivalled the Toronto Lynx for many years. However, the fan base of both clubs was narrow compared to the loyalty fans give their MLS clubs today.

The true rivalry between the teams began in 2008 with the inception of the Canadian Championship –the domestic cup competition formed that same year – giving Toronto and Montreal an outlet to play each other. TFC entered MLS a year earlier as an expansion team, while the Impact played in the United Soccer League.

On May 27, 2008, the teams played the first leg at the newly opened Stade Saputo in Montreal. In front of a crowd of 12,083, Toronto won 1-0 on a 72nd-minute goal by Puerto Rican defender Marco Velez.

The return leg in Toronto had a different outcome. Thanks to a 1-1 draw, Montreal won the inaugural Voyageurs Cup after posting an overall 2-1-1 record and shocking the MLS favourites on their home soil.

The following year, Toronto was able to exact its revenge and did so in epic fashion. In the final game of the tournament, TFC needed to win by at least four goals to supplant the Vancouver Whitecaps atop the Canadian Championship standings and capture the Voyageurs Cup. TFC travelled to Montreal to face the Impact in the final match.

After conceding a penalty in the first half, the Reds went down 1-0. Things looked grim, especially for a team that had never scored more than five goals in a game. However, Toronto went on to score six unanswered goals – spearheaded by a Dwayne De Rosario hat trick – to win the Canadian Championship by goal differential.

Up to that point, it was the biggest victory in TFC history. They won their first major trophy and did so against a rival that captured the same hardware the previous year.

In 2010 it was much more of the same. Toronto captured its second straight Voyageurs Cup, easily handling the Impact in both the home and away legs, winning 2-0 and 1-0 respectively. Toronto would go on to win four straight Canadian Championships from 2009-2012.

Montreal entered MLS as the league’s ninth expansion franchise, joining Toronto and Vancouver as the three Canadian teams. This opened the door to a much stronger rivalry as both Montreal and Toronto were pitted in the league’s Eastern Conference.

The teams played their first competitive MLS match on April 7, 2012, at Olympic Stadium in front of 23,120 fans and the sides did not disappoint. After the Impact took an early lead, TFC defender Logan Emory was sent off for a straight red card and Andrew Wenger – the first overall pick of the 2012 MLS SuperDraft – netted the winner in the 81st minute. Montreal’s first MLS victory came at home against their biggest rival.

In 2013, the Impact won their first Canadian Championship since joining the MLS. In the second leg of their semi-final, Montreal defeated TFC by a score of 6-0. To date, that is the largest margin of victory in 401 Derby history. The Impact would then go on to win the trophy against the Vancouver Whitecaps.

The following year, Montreal and Toronto met again, this time in the final. After a 1-1 draw in the first leg, the second draw provided late drama. In injury time Marco Di Vaio blazed in front of goal and took a shot that hit the crossbar. The ball then perfectly fell for Felipe who put it past a diving Joe Bendik. The stunner helped Montreal lift their second straight Voyageurs Cup.

In 2015, both teams looked to be on the rise. Toronto brought in the likes of former Juventus man Sebastian Giovinco and striker Jozy Altidore, while Montreal signed Chelsea legend Didier Drogba. The buzz for the two Canadian teams was at an all-time high and both squads delivered. The Impact finished third in the Eastern Conference while TFC finished sixth. It was a fitting placement in the standings as the teams would draw each other in the MLS playoffs for the first time.

The stage was set on Oct. 29, 2015, at Stade Saputo. The big-ticket stars dominated the headlines as Giovinco vs. Drogba was a mouthwatering proposition. What happened next was an outstanding Montreal performance led by an inspired front line of Ignacio Piatti and Drogba. Canadian Patrice Bernier opened the scoring for the Impact in the 19th minute, Piatti scored soon after in the 34th minute and Drogba added a tap-in for the cherry on top. The Reds were completely humbled 3-0 in their first MLS playoff game as Montreal exposed TFC’s poor defending.

Montreal advanced to the next round but eventually fell in the conference semi-finals to the Columbus Crew.

A year later, the two rivals met once again, this time with the stakes at its highest point as the winner would move on to the MLS Cup Final. There was no bigger stage than Montreal for these two Canadian teams to face each other. The Impact were the home team for the first leg and it started with controversy. The game, played before more than 60,000 fans, was delayed because the painted lines of the 18-yard box were too narrow, so they had to be repainted.

After a 40-minute delay, the game got underway and it looked as if déjà vu would play a role. The Impact took a 3-0 lead by the 53rd minute on goals from Dominic Oduro, Matteo Mancosu and Ambroise Oyongo. But this was a different, stronger TFC team this time around. Altidore made his presence felt, scoring in the 68th minute, and then bullying his way inside the box to set up Michael Bradley for the second Toronto goal.

Montreal ended up winning the first leg 3-2, but Toronto scored two important away goals to claw their way back and make it interesting heading back home.

The scene at BMO Field for the second leg looked as if it was straight out a European soccer fairytale. Harsh November rain soaked the field as the rivals looked to see their way through to their first MLS Cup Final.  Oduro scored to silence the loud Toronto crowd, but a 37th-minute goal by Armando Cooper gave Reds fans renewed hope. Then, with the game at 2-2, Reds defender Nick Hagglund gave TFC the lead and sent the game to extra time with an aggregate score of 5-5.

Late drama ensued with a moment Toronto fans will always remember. Unlikely hero Benoit Cheyrou headed the ball past a sprawling Evan Bush to give TFC the lead, sending the crowd into a frenzy. Tosaint Ricketts added another and the Reds went on to win with an aggregate score of 7-5.

This playoff tie was the pinnacle turning point that galvanized this rivalry, making it one of the most intense Canadian sports rivalries and much-watch TV events. The unforgettable scenes at BMO Field that November night proved to Canadians who weren’t watching the game that soccer in Canada was on the rise and excitement building because of these two talented teams.

The last major matchup between the Impact and TFC took place in June. After a 1-1 draw in the opening leg, TFC hosted the second leg and the drama continued. With the game tied 1-1, Bernier was sent off after a controversial call. With the Impact down to 10 men, Toronto continued to press high up the pitch. It looked to be headed to extra time. Then somehow, with the game in the 94th minute, Giovinco deflected a pass into the net and scored on the final chance of the game to give Toronto the Voyageurs Cup. It was a shocking finale, but once again TFC came out on top in dramatic fashion.

The rivalry between these two clubs has evolved into one of the most intense derbies in North America. Both teams have entered their primes and are in peak position to win the MLS Cup. The passion of the Reds and Impact has attracted a new soccer audience, while also helping to grow the game across the country.

It’s Heineken rivalry week in the MLS, and the 401 Derby continues its story as Montreal hosts Toronto at Stade Saputo. You can catch all the action live on Sunday, Aug. 27, at 4:30PM ET/1:30PM PT on TSN1, TSN4, TSN5 and TSN GO.