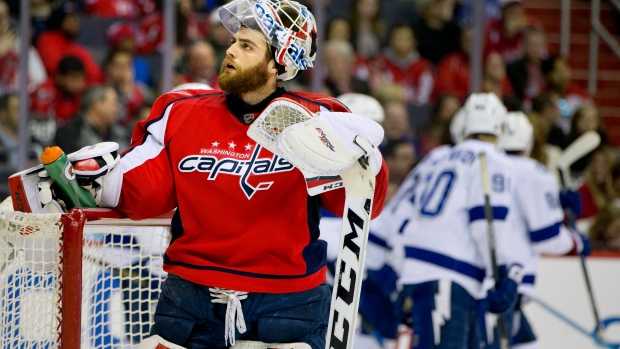 Last week, I received an e-mail from a Washington Capitals’ fan asking about single-game win probabilities and the likelihood of erasing three-goal deficits in regulation. Essentially, he wanted to know what the odds were of Washington being able to comeback from what appeared to be an insurmountable Lightning lead.

Tampa Bay’s Friday night collapse was talked about a bit over the weekend, but it’s worth pointing out that they aren’t the only team who has been in this unfortunate position. Anaheim blew a three-goal lead against Dallas back in October, losing in regulation. Also in October: Montreal choked away a three-goal lead in Edmonton.

That’s three collapses just from memory, and there may be a few others that I’m forgetting (the Flyers managed the rare feat Monday night against the Blues). But it’s still worth pointing out just how infrequent (and unlikely) these occurrences are. Further to that point, it’s also worth pointing out that the likelihood of each of these regulations losses is a bit different in nature.

First, let’s illustrate just how tough it is to come from behind in today’s NHL. This means calculating simple win probabilities over intervals based on current score differential. We can get to this very simply using what’s called a “Poisson process.” We can use Poisson here for two primary reasons: (1) Goal-scoring events occur with a known average rate; and (2) Goal-scoring events are time-independent of one another.

After we calculate win probabilities at each interval based on estimated scoring rates, we can observe how difficult it is for a team to come from behind down three goals. I’ve noted other pertinent score states as well. (Note: this model does account for home-ice advantage, but not talent disparities – more on that later.)

Through this, we can observe how each of the three above-referenced games (Edmonton’s comeback, Dallas’ comeback, and Washington’s comeback) was different.

Let’s look at that Washington/Tampa Bay game first, since that was most recent. Again, this is simply calculating win probability based on score state vs. time remaining. Here are Washington’s chances:

Their low-point by win probability was right before Alex Ovechkin’s goal to make it 3-1, which came at just about the halfway point of regulation. It was down as low as 3.7 per cent. So at that point, Tampa Bay was about 96.4 per cent likely to win the game.

Let’s look at a couple of those older games now. Here’s Anaheim/Dallas:

Another three-goal deficit erased in regulation, but this game was a lot closer than the Washington/Tampa Bay game. That’s largely because Dallas started erasing the deficit much earlier in the game – their win probability never dropped below 5 per cent, which was the low mark right before Patrick Sharp’s power-play goal.

Last game for fun: Edmonton/Montreal, another game from back in October and more likely known as Leon Draisaitl’s coming-out-party.

Brendan Gallagher, Torrey Mitchell, and Devante Smith-Pelley scored on a flurry of first-period goals. The Oilers’ low point happened just ticks before Draisaitl started the comeback with just seconds left on the clock in period two. At that point in time, they were just 2.5 per cent likely to win the hockey game – by far the lowest number we have seen out of our sample of games.

The Oilers furiously rallied in the third, getting goals from Brandon Davidson, Benoit Pouliot, and again from Draisaitl – who started Edmonton’s return volley.

The overarching point here is pretty obvious to me. These comebacks are pretty rare. We focused on just a few games where teams successfully rallied against the clock and their opponent. This, of course, ignores the other side: all of the failed rallies this year where teams were down by three goals, and that deficit either stayed at three, or continued to grow unfavourably.

As a final aside: someone could build out a really cool automated win probability model that calculated expectancies based on score state and time remaining. Home-ice advantage is already captured here, but another factor that would add value here is capturing team talent discrepancies. Doing so would make comebacks more likely for teams like Dallas and Washington, and much more unlikely for teams like Philadelphia and New Jersey.

It’s impossible to avoid noticing how dire win expectancy gets for trailing teams as time continues to run off of the clock. We focused on those big three-goal deficits here, but the logic is true for essentially every score state. I think there’s a lot of value added in showing coaches – especially conservative coaches who only opt to open things up when there are but a few minutes left on the clock – this type of win probability model. It visualizes quite well how big of an enemy time is when you’re trying to rally for victory.