About a month ago, I looked at the valuation of draft picks as movable assets. It’s a really interesting exercise, one that a number of teams are already doing (to varying degrees) as they weigh potential trades at the draft.

If you recall, one of the bigger takeaways from that piece was that teams were reasonably strong at identifying NHL talent in the first couple of rounds, and substantially less so at identifying NHL talent in the mid-to-late rounds. The difference between, say, the value a late fourth-round pick may provide to a team versus an early seventh-round pick (by my adjusted games criteria) was pretty marginal. I think there are myriad environmental variables causing this, but it's something that's starting to be appreciated as reality by a number of teams around the league. It’s precisely why you’ll see those teams trading down when those opportunities present themselves, picking up two “lottery tickets” in exchange for one.

In that piece, we focused on forwards and defencemen. I’ve consistently been of mind that there’s sort of a pyramid of competent analysis in modern hockey across positions. Teams evaluate forwards reasonably well because there’s a couple of metrics (goals, point scoring) that capture player talent reasonably well. Teams evaluate defencemen much more poorly because of the absence of such defining statistics. Newer stats like RelativeCorsi% strike me as great tools for front offices to use, but player valuation on the blueline really does remain a mixed bag.

That brings us to goaltenders, which are far and away the most unpredictable. I think there are many reasons for this – I attribute a good portion of the blame to frequent changes in positional development, poor statistical measurements and generally poor scouting. But again, whatever theory you subscribe to, it doesn’t change reality: We as a hockey community, from general managers to fans, have done an exceedingly poor job at differentiating between skill sets of NHL-bound goalies.

From the same draft data set (starting in 2000), take a look at how goaltenders who played at least one NHL game have carried save percentages (our best goaltender performance metric) over the last 15 years, sorted by round: 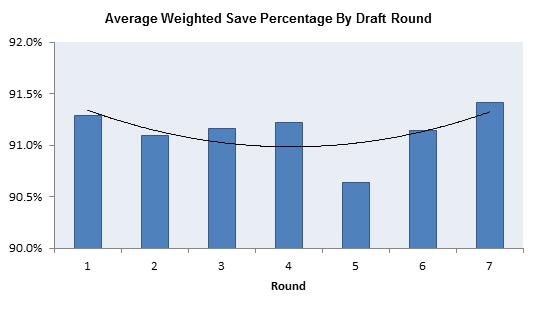 You might wonder how the first round – a round that’s featured Carey Price, Semyon Varlamov, and Cory Schneider to name a few – could look indiscernible from the seventh round, which is more or less just Henrik Lundqvist.

Well, the answer to that is pretty simple. Consider the environment surrounding a first-round goaltender. It’s almost certain that he’s going to get significantly more rope to prove himself because of where he was selected in the draft. The opposite is reasonably true for any late-round goaltender. He’ll get significantly less rope, and usually at the first or second sign of struggle he’s back on the bench.

It’s a true “other side of the coin” scenario for goaltenders taken at the poles of the NHL draft. For every Price, Varlamov and Schneider, there’s a Rick DiPietro, Pascal Leclaire or Dan Blackburn. All three of those goalies played at least a full season’s worth of action. DiPietro and Leclaire played hundreds of games!

So, yes, you’ll more often than not find better goaltenders in the early rounds. But with such an investment comes great risk (the chance of an early pick flaming out despite the significant pay) and great opportunity cost.

One thing the above analysis will ignore though are the goalies who simply never make it to the NHL (you can’t analyze a save percentage that never happens). Though we’d all agree that usage of a seventh-round pick on a goalie is very low risk, a team should still be dinged for missing on the player. To that end, we would expect to see that the chance of developmental failure for an early-round goaltender is less than that of a goaltender selected in one of the mid-to-late rounds.

What we need is a bust rate – a percentage of the total goaltenders taken by round that weren’t able to play a full season. Though this number will be greatly influenced by draft pick or selection bias, it should show that a higher percentage of early-round goaltenders do get a taste at the NHL level.

We also need is to compare it to what a team could do away from drafting a goaltender (e.g. drafting a skater), and the opportunity cost between the two. From this we can truly start to sense if it’s worth it to make big, early-in-the-draft investments on goaltenders when two options are available: (a) wait until later to select one; or (b) do not select a goalie and simply draft the best available skater.

There’s evidence that this makes sense. Here are bust rates for each position by draft round since 2000 – bust rate defined as not having played a full season of games.

You can see this start to smooth in the mid-to-late rounds, but round one is a jarring disparity. Unless your team is in absolute dire straits for a goaltender and there’s a can’t-miss talent on the board, it’s hard to believe you should be swallowing the risk assumed with taking a netminder. Their failure rates are almost twice as large as a forward or defender in the same round, despite a team being forced to make the same financial investment in all three.

What’s our conclusion here? Mainly that I’d be hard-pressed to subscribe to any draft theory that encourages early selection of goaltenders. Because our valuation of the position remains so weak, there’s real opportunity in snagging legitimate goaltending talent later on in the draft. And because of the greater chance of your prized goaltender failing relative to a forward or defender in the same round, a team assumes very real opportunity risk on top of the actual investment risk of the player.

Something to consider when Filip Gustavsson, Carter Hart, and Evan Fitzpatrick are ready to come off of the board at the draft this weekend.