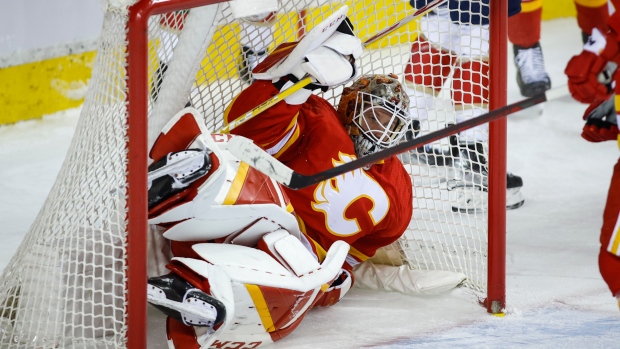 On Tuesday, we looked at a struggling Edmonton Oilers team and some incredibly discouraging trends with the performance of their penalty-kill groups.

What’s going wrong in Calgary? At even strength, quite a bit. The team has been in a bit of a shooting slump in recent months, but the part that must give head coach Darryl Sutter the most heartburn is what’s happening in front of his goaltenders.

The Flames jumped out to a roaring start (marked by a six-game win streak in October), playing an up-tempo and puck-dominant style of hockey

One thing struck me in the early days of this season: the Flames hellaciously defended the neutral zone and did a masterful job at limiting opposing offences to one-and-done opportunities when they were able to gain the blueline. There were shades, albeit brief, of Sutter’s old Los Angeles Kings teams – teams renowned for winning games on margin, drastically outchancing opponents and playing an in-your-face style of defence.

But that’s changed with time. Look at the Flames underlying numbers at even strength. I have plotted their rate-scoring for and against, as well as expected rate-scoring based on shot volumes and the quality of those shots.

Offensively, the Flames have been the same team all season, just with a bit less shooting luck around the holiday season. With whatever limitations the Flames have down the middle of the lineup, only eight teams have scored more goals even-strength this season. Even during this two-month swoon, the Flames are seventh in expected goal rates – a tick behind a Toronto Maple Leafs team that’s been unstoppable in the offensive zone for some time now.

Defensively, that’s a horrific trend. There is no other way to say it. And notably, expected goal rates are surging in lockstep with goals conceded. We can reasonably infer two points from here: the degree in which opponents threaten the Flames in the defensive zone has drastically changed to the downside, and Calgary’s goaltenders haven't been the erasers they need to be – more on this in a moment.

What’s interesting about the skater group is there isn’t a specific line or pairing that’s contributing to the defensive breakdowns. In fact, only Andrew Mangiapane and Dillon Dube have been able to hold firm to their defensive numbers through this mid-season swoon. (Mangiapane and Dube have spent about half of their even-strength minutes together, mixing and matching with players like Mikael Backlund and Blake Coleman.) 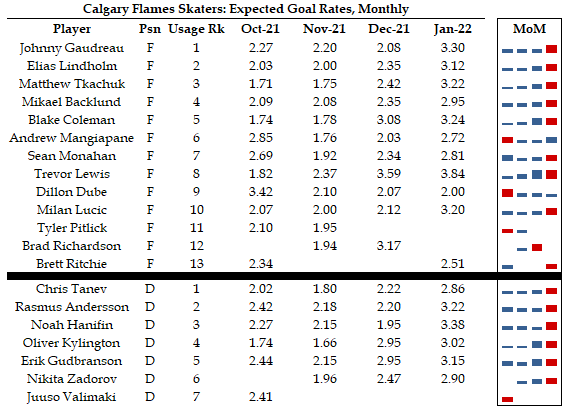 I mentioned the goaltenders earlier and how they haven’t been able to erase goals against in a way you might like to see during a difficult stretch like this. Jacob Markstrom and Dan Vladar were aces to start the season, but right now they are adding to the problem:

Ultimately, this is how you end up mired in a lengthy losing stretch.

Without high-end shooters or an impenetrable blueline, the Flames – like many teams – must win on volume. You win on volume by dominating possession of the puck and controlling the run of play. That’s abated, in large part because they are spending so much time bailing water in the defensive third. Teams are increasingly comfortable attacking on the inside of the Calgary defence, and the goaltenders have been all too accommodating in allowing them to find the back of the net.

The Flames are a better team than they have shown over the past two months, but performance is not going to rebound until Sutter’s team builds some defensive integrity back into their play. Right now, it has the look and feel of a team at risk of missing the playoffs.

And no, that’s not an overreaction.