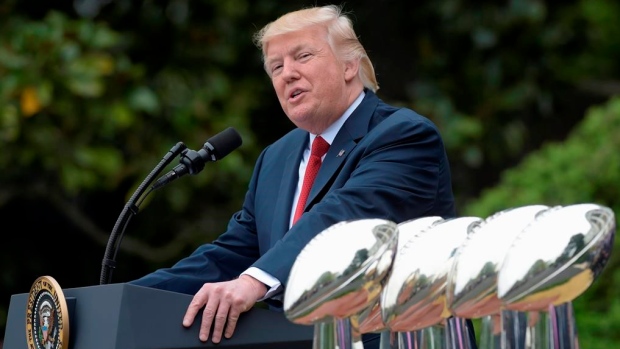 WASHINGTON — President Donald Trump praised an NFL policy banning kneeling during the "The Star-Spangled Banner," saying that "maybe you shouldn't be in the country" if you don't stand for the anthem.

Trump spoke to "Fox & Friends" in an interview that aired Thursday. The policy forbids players from sitting or taking a knee on the field during the anthem but allows them to stay in the locker room. Any violations of the new rules would result in fines against teams.

"I think that's good," Trump said in the interview that taped Wednesday. "I don't think people should be staying in the locker rooms, but still I think it's good. You have to stand proudly for the national anthem. Or you shouldn't be playing, you shouldn't be there. Maybe you shouldn't be in the country."

Trump told confidants Wednesday that he was thrilled with the NFL's new policy, believing it vindicated his move last fall to call out the players who kneeled while suggesting that he planned to call attention to it again when the season starts in September, just months before the midterm elections, according to a person familiar with the president's conversations but not authorized to discuss them privately.

Trump first seized upon the issue last September when called on team owners to fire players who followed former San Francisco 49ers quarterback Colin Kaepernick's lead by kneeling during the national anthem. During a September rally, he referred to an NFL player making a gesture during "The Star-Spangled Banner" as a "son of a bitch" who should be fired.

The president's comments spurred a national conversation about patriotism and the nation's symbols and the use of peaceful protest. Trump, meanwhile, told Republican allies that he thought the culture war issue was good for his base even as he received some criticism for seemingly being more focused on the anthem flap last fall than the government's response to a deadly hurricane in Puerto Rico.

Trump said in the Fox interview that he thought "the people" pushed for the new policy.

"I brought it out. I think the people pushed it forward," Trump said. He added: "you know, that's something ideally could have been taken care of when it first started, it would have been a lot easier, but if they did that, they did the right thing."