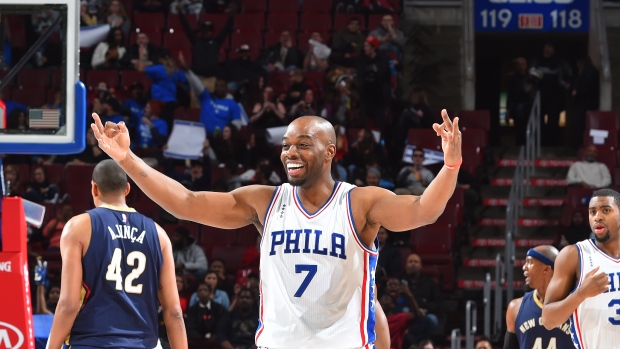 PHILADELPHIA — The Philadelphia 76ers have become the first team in the NBA to put a sponsorship logo on player uniforms, striking a deal with StubHub for a spot on one of the hottest pieces of real estate available in sports.

StubHub, a website that connects ticket buyers and sellers, will have its logo appear on the front left of the jersey in 2017-18 for the start of a three-year trial period. The patches will appear opposite Nike's logo, and measure about 2 1/2-by-2 1/2 inches.

StubHub's jersey patch will be included on all jerseys sold at Sixers' home games.

"We're so tightly associated with the event-going experience that it was natural for us to move aggressively and chase this opportunity," StubHub President Scott Cutler said.

The Sixers are set to display the jersey Monday morning in front of the National Constitution Center.

Logos appear on international and MLS soccer jerseys, and many athletes in individual sports wear their sponsors' attire in competition. The NBA announced the deal last month and expected the move could generate at least $100 million annually. The NBA becomes the first of the four major sports leagues to allow the corporate sponsorship patch, a step that the NFL, Major League Baseball and NHL have yet to take.

"I've always been jealous of the English Premier League teams. NASCAR figured it out a long time ago," 76ers CEO Scott O'Neil said. "For some reason, the big four sports in North America have not. I think it's an unbelievable opportunity."

Major League Soccer teams began selling jersey sponsorships in 2007, and several clubs each generate more than $6 million annually in revenues from ads on the front of jerseys.

"I think there's a push to figure out new sources of revenue and the NBA seems to be a leader in that," O'Neil said.

Adidas enters the final year of its contract as the NBA's official outfitter next season. When Nike takes over, its logo will become the first on league's jerseys, except for those of the Charlotte Hornets, who are owned by Michael Jordan. The logo of his Jordan Brand, a subsidiary of Nike, could be on the Hornets' instead.

"The numbers that have been run that track viewers eyeballs, the numbers are pretty aggressive in terms of where the placement is," O'Neil said.

Commissioner Adam Silver said in April the sales can expand the league's growth oversees by drawing companies who want to be involved.

"But there's a reason this is a pilot program," he said. "I mean, we listen very closely to our fans, and so we'll see what the reaction is."

The WNBA has allowed teams to sell ad patches since 2009 and the NBA allowed Kia to advertise on the 2016 All-Star game jerseys.

The Sixers and StubHub already partnered on a ticketing platform for next season that will blend the secondary and primary ticket options on one site. The Sixers will direct all buyers to its team-branded experience on StubHub.

The Sixers went 10-72 this season, easily the worst record in the NBA, and are primed to win the No. 1 overall pick in Tuesday's draft lottery.

"Their current spot in the standings is largely irrelevant to us because we're in this for the long term," Cutler said.

StubHub also had an advertising patch on the 76ers' D-League team, the Delaware 87ers, this season.

This story has been corrected to reflect that several MLS clubs each earn more than $6 million annually in revenues from jersey ads, not that the clubs collectively generate that amount.