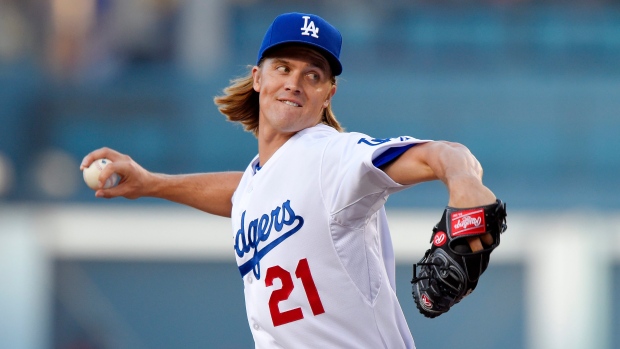 The Toronto Blue Jays are considering extending a contract offer to free-agent pitcher Zack Greinke and while the team would be considered a long-shot to sign him, the move would establish that the Jays are planning to double down on this year's playoff-calibre team.

Greinke, 32, is arguably the most coveted free agent in baseball this winter. He was 19-3 this season with a major-league best 1.66 earned-run average. He opted out of his contract with the Los Angeles Dodgers with three years and $71 million still guaranteed.

EPSN baseball analyst Jonah Keri joined the Bryan Hayes Show to discuss whether he thinks the Blue Jays are seriously considering an offer to Zack Greinke and pitchers the Jays could be interested in.

Greinke's agent did not reply to an email.

In the meantime, it's unlikely the Jays will pursue a long-term contract with American League Cy Young finalist David Price. The baseball executive said some scouts believe Greinke has a better chance than Price to maintain his effectiveness into his late 30s. And that's a reasonable assessment, said TSN baseball analyst and former New York Mets general manager Steve Phillips.

"A couple things worry me about David Price," Phillips explained. "He recoils in his delivery. Instead of following through with his arm after he throws the ball, he stops and pulls the arm back. That's deceleration and that's where injuries can take place."

"Also, if his velocity drops, Price will need high quality secondary pitches and he really doesn't have those," Phillips said. "Greinke has quality secondary stuff and I think he'll be better later in his career than Price."

Phillips added that Greinke may cost a team more money per year, but he could be signed for a shorter term than Price. "Maybe you sign Greinke for five years instead of seven with Price," he said. "Making a contract offer now would also make a statement for the Blue Jays.

"American players have a reluctance to go to Toronto. They think about the hassle for themselves and their families to go across border. If the Jays want a guy, they have to go above and beyond and make a statement. So differentiating themselves from the market can be important. Greinke is a bit different, quirky in some ways. This sort of thing may mean something to him."

Greinke is one baseball's best stories. He walked away from the game in 2006, battling social anxiety disorder and depression, according to a story on MLB.com. He later returned to the majors, crediting a prescription of the medicine Zoloft, and went on to win the Cy Young Award in 2006 before signing a then-record $147-million deal with the Dodgers.

The MLB.com story reported Greinke remains "uncomfortable" when he's recognized on the street.