Can we have a discussion about hits to the head?

A rationale one devoid of emotion and hyperbole?

Here's how the rule reads:

“Illegal Check to the Head – A hit resulting in contact with an opponent’s head where the head was the main point of contact and such contact to the head was avoidable is not permitted.

In determining whether contact with an opponent's head was avoidable, the circumstances of the hit including the following shall be considered: (i) Whether the player attempted to hit squarely through the opponent’s body and the head was not "picked" as a result of poor timing, poor angle of approach, or unnecessary extension of the body upward or outward. (ii) Whether the opponent put himself in a vulnerable position by assuming a posture that made head contact on an otherwise full bodycheck unavoidable. (iii) Whether the opponent materially changed the position of his body or head immediately prior to or simultaneously with the hit in a way that significantly contributed to the head contact.”

Now here's video of the Trouba hit on Stone:

Was Stone’s head the “main point of contact” on Trouba's hit?

Yes. It's not up for debate.

Trouba did not “hit squarely through the body.” Stone's head was “picked as a result of poor timing, poor angle of approach...”

Stone did not put himself in a “vulnerable position.” He did not “materially change the position of his body or head immediately prior to or simultaneously with the hit in a way that significantly contributed to the head contact.”

If you're ticking off all the boxes for a Rule 48 violation, Trouba's hit on Stone clearly qualifies.

As an aside, for those Senators' fans who were miffed a major penalty was not assessed to Trouba on the play, the rule book is pretty clear on this.

Trouba was correctly assessed an illegal check to the head minor penalty (Rule 48). There is no provision for a major penalty on Rule 48 – it simply doesn't exist – unless the referee deems it to be a match penalty for “intent to injure.”

Was Trouba's hit an “intent to injure” type of play?

Stone was eligible to be hit. Trouba's hit wasn't as malicious or vicious as it was poorly timed and/or misaligned. There's always some degree of subjectivity on these, but I would like to think we can all agree that didn't look like an intent to injure match penalty.

Based on all of the above, there was no surprise whatsoever when NHL Player Safety tweeted late last night that Trouba would have a disciplinary hearing today.

And he will be suspended.

Isn't this a lovely, civil discussion we're having so far?

Let's try to keep it that way, but we're going to severely test those limits as we talk about Evgeni Malkin's hit on Blake Wheeler last Thursday.

At 11:04 of the third period, Malkin was assessed a two-minute minor for interference when he hit Wheeler, who was trying to clear a loose puck from the slot area but never actually got his stick on the puck. To the letter of the law, it was interference. Malkin likely couldn't have known Mark Stuart would, by a split second, get his stick on the puck instead of Wheeler, so Malkin hit Wheeler.

But the referee did know Wheeler wasn't eligible to be hit; hence the call for interference.

One might suggest Malkin could have been whistled for charging instead of interference. His feet appeared to leave the ice just prior to contact being made. It easily could have, probably should have, been a charging minor.

Why, though, was this not a Rule 48 violation, an illegal check to the head minor?

This angle of the Malkin hit clearly demonstrates that while the head was contacted, Malkin also hit “squarely through the body.”

Angry Jet fans – no shortage of them right now – would rather you look at these views on Malkin making contact with Wheeler's head: 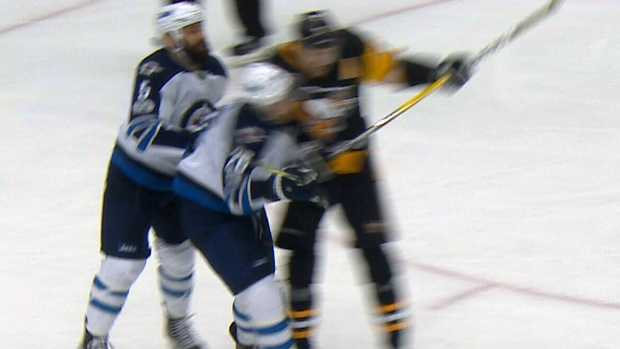 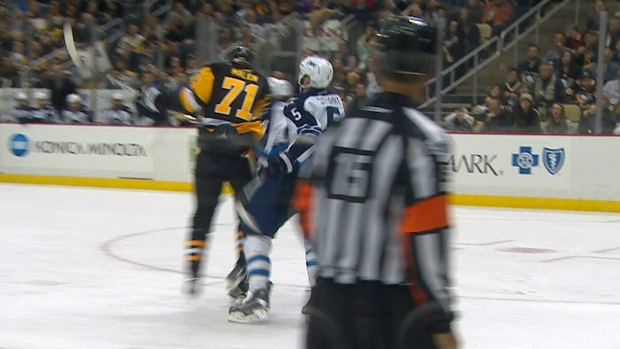 In any case, in the eyes of the referee(s), interference or charging or Rule 48, the outcome would be the same: A minor penalty. The ref did his job.

The argument would be that not every interference, or charging, penalty “rises to the level” of supplementary discipline. Sometimes a penalty is just a penalty and, in this instance, that is precisely how Player Safety opted to look at it. That's never going to be a strictly black-and-white argument, so the subjectivity engenders debate.

Displeased Jets fans would argue that there's no difference between Trouba hitting Stone in the head and Malkin hitting Wheeler in the head.

But, according to NHL rules, there most clearly is a difference.

The NHL is very forgiving on hits to the head IF said hit to the head is also accompanied with a full body-on-body check.

And in spite of the contact Malkin made with Wheeler's head, Malkin did make a body-on-body check, whichever angle you choose to look at it.

That, in a nutshell, is why Trouba is looking down the barrel of a Rule 48 suspension and Malkin isn't.

The minute I saw the Malkin on Wheeler replays, I knew Malkin would not be getting supplementary discipline on the basis of Rule 48 and that it was doubtful the interference or charging would rise to that level either.

Now, though, let's wade into even stormier waters: Should this Malkin-Wheeler type of head hit be excused because it's viewed more as a bodycheck?

It's a debate that's been going on for some time now, almost since the inception of Rule 48. A growing number of NHL general managers – most notably New Jersey's Ray Shero, Florida's Dale Tallon, Chicago's Stan Bowman, Columbus's Jarmo Kekalainen, Minnesota's Chuck Fletcher and Pittsburgh's Jim Rutherford, amongst others – believe there should be stricter enforcement of Rule 48 for significant head contact even if it includes a body-on-body check.

But while those numbers have grown over the last few years, the majority of NHL GMs – led by Anaheim's Bob Murray, Edmonton's Peter Chiarelli, Los Angeles's Dean Lombardi, Philadelphia's Ron Hextall, Tampa's Steve Yzerman and Toronto's Lou Lamoriello, amongst others – still fiercely oppose any broadening of Rule 48 and, in fact, already think the NHL legislation cuts it too fine, that the game is on the slippery slope to becoming a non-contact league.

For what it’s worth, and it’s not much, I didn't like the Malkin hit on Wheeler. I like to think I like hitting in hockey as much as anyone, but Malkin's hit struck me as unnecessary. The puck was gone. Outside of fulfilling the time-worn “finish your check” mantra or protecting the sky-is-falling chorus of “there's going to be no hitting in the game,” I'm not sure what purpose Malkin's hit served, especially weighed against the contact to Wheeler's head.

But I have also come to realize everyone's threshold for this type of hit is different, and if the GMs on opposite sides of the debate haven't figured it out yet, I don't like our chances for resolving it here today.

I get that Jets fans are angry, and I wouldn't want to be dismissive of them, though let's be honest: How many of them would be outraged if it had been Wheeler who hit Malkin in that fashion?

What I would really be curious about is how the players who play this game – the guys with the greatest vested interest – feel about the Malkin hit on Wheeler. I'd love to sit down with an NHL team, show them multiple angles of Malkin hitting Wheeler, and get all 23 players’ true feelings on it.

Are they good with that type of hit? Should it be suspendable?

There are bound to be opinions at both ends of the spectrum, but I'd be really curious to see how big, or little, the swing is either way. I wouldn't even want to guess which way popular opinion would go.

I know the players, by virtue of NHL Players' Association representation on the Competition Committee, have input and power on rule changes, but I'm not sure I'd necessarily equate that to really knowing what the rank-and-file players are actually thinking.

I mean, it's their heads being hit on now legal checks. Maybe I'd feel better about the Malkin hit on Wheeler if I knew the players, the majority of them anyway, didn't have an issue with it.

In the pantheon of NHL hits to the head, neither the actionable Trouba on Stone, nor the summarily dismissed Malkin on Wheeler, are the most egregious or incendiary we've ever seen. Not even close.

That’s why I thought maybe they would be good ones to have a rational discussion about.