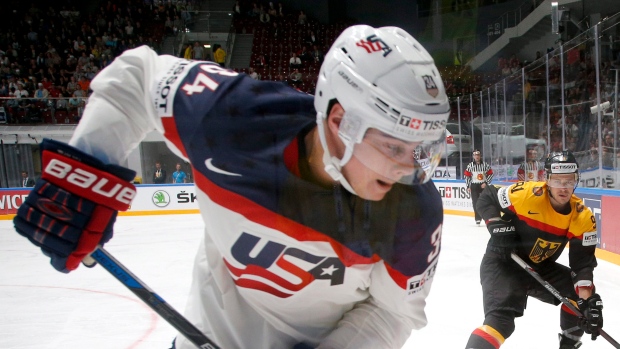 I’ve said it before, but it’s worth repeating one final time as we approach the NHL Entry Draft in Buffalo on June 24: position matters. That’s why Auston Matthews, a complete, elite centre, gets the nod over explosive winger Patrik Laine at the top of the final Craig’s List.

There is no doubt Laine had a season for the ages and one not seen from a draft- eligible player since Jaromir Jagr in 1990. He excelled at the World Juniors then followed it up with MVP performances in the SM Liiga playoffs and at the World Championships, leaving no doubt about his terrific talent.

An argument can be made that Laine may score more at the NHL level, but as a centre, Matthews can impact the game in more ways. My view is simple: Without a complete, elite centre, a team will have a very difficult time being successful.

Jesse Puljujarvi, Pierre-Luc Dubois and Matthew Tkachuk have all shown they have the capabilities to be front-line players in the NHL, combining considerable size with high-end skill. Their impact was significant this season, and the trio have the tools to do the same at the professional level — perhaps as soon as the 2016-17 season.

TSN's resident scout Craig Button joined the Big Show for some NHL talk including the favourite for the Conn Smythe, Edmonton's off-season options impacting their fourth overall draft pick and why Auston Matthews and Patrik Laine should be the top-two names called at the upcoming NHL draft.

Clayton Keller and Logan Brown come in at six and seven respectively. The two Americans are separated by eight and half inches in height and 44 pounds in weight, but there is not much separating their ability to impact the game offensively. Keller’s imagination and creativity is unmatched in this draft, conjuring up images of Patrick Kane.

Brown has grown, literally and figuratively, over the course of this season with the Windsor Spitfires. His game has become increasingly impactful and he reminds me of Joe Thornton when he passes the puck and makes plays for teammates.

Button: Logan Brown is going to go early in this draft

Craig Button says Logan Brown will go early in the draft. A 6'6" centre who plays like Joe Thornton, according to Button who also says at some point, the Canucks are going to have to replace Henrik Sedin. Big bodied number one centremen don't come along very often.

Mikhail Sergachev not only made a smooth transition to the OHL with the Spitfires, he was voted the best defenceman in the entire league. He excels in every single area of the game. He can skate, pass, shoot, has a physical element and very well may be the most complete blueliner available in the draft.

Olli Juolevi has excellent hockey sense that allows him to always feel the rhythm and pace of the game. That gift allowed him to play with effortless command all season long for the London Knights.

So there you have it, the end of the line for Craig’s List, 2016 Draft Edition. The end for us is just the beginning for these players. There is real excitement for what these prospects could mean to a franchise. If the performances we’ve seen leading up to the draft are an indication of what lies ahead, NHL fans are in for a treat.